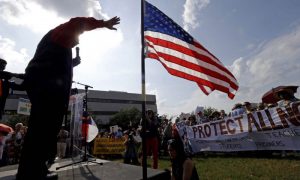 Reverend Dr. William J. Barber, Jr., and the Poor People’s Campaign – A National Call for a Moral Revival, rocked the Central United Methodist Church on Tuesday night with singing, poetry, testimonials, and prayer to rekindle a prophetic moral vision for justice, social change and movement building.  With standing room only, the church was packed with more than 1,200 people, while many stood outside to listen

Speaking to the recent events in Charlottesville, Virginia, Rev. Barber highlighted the interrelatedness of the issues we are facing.  He said working in isolation no longer works and we must together build a just, sustainable and participatory society.  He reminded the audience that we pledge allegiance to “one nation under God with liberty and justice for all.”

Rev. Barber is a Protestant minister, based in North Carolina.  He is the President and Senior Lecturer of the Repairers of the Breach, and a NAACP board member.

The Poor People’s Campaign is a movement to address the challenges we are facing today, drawing on the wisdom of and moving beyond Dr. Martin Luther King’s campaign of 1967 and 1968.  That campaign’s tenants were to address systematic racism, poverty, militarism, and economic development. 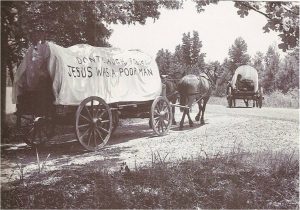 In March, 1968, Reis Tijerina, of the The Alianza Federal de Mercedes (Federal Alliance of Land Grants), attended a key meeting in Atlanta.  https://the1960sbloggcu.wordpress.com/2012/11/29/la-alianza-federal-de-mercedez/ In May, 1968, he joined the caravan from New Mexico to the Poor People’s March on the National Mall in Washington, DC.  People of all races gathered to demand economic justice.  The march was held on May 12th, following the tragic assassination of Dr. King in early April.

Albuquerque was the campaign’s second stop on a 25-state revival tour, with an additional stop in Washington, DC.  Fifteen regional trainings will be held for 1,000 committed people from each revival tour state to use civil disobedience the way Rosa Parks did.  Her protest on the bus changed the race narrative.  The next stops on the tour are Topeka; Milwaukee; and Detroit.  To learn more and to sign the pledge, go to https://poorpeoplescampaign.org/

Testimonials focused on the four areas of the campaign were given by a diversity of speakers from New Mexico, including Samia Assed, a Muslim activist based in Albuquerque; Arturo Uribe, a resident of Mesquite, who lives near a dairy; Todd Wynard, a Mennonite working on watershed discipleship in the Taos area; Tina Cordova, co-founder of the Tularosa Basin Downwinders Consortium, working to obtain compensation and health care for the Trinity downwinders; and Monique Salab, an Iraq war veteran and member of the Veterans for Peace.  To view the livestream of the Albuquerque meeting go to http://www.breachrepairers.org/ or http://www.ourrevolutionnm.us/ 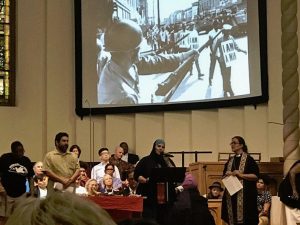 Ms. Salab explained how her work for the abolition of war puts her in classrooms to talk about the lies of the military, the racism, the gender bias, and sexual bias.  She is particularly concerned about how the junior ROTC programs are “invading low income schools.”

Ms. Cordova received a standing ovation for her talk about the health, economic, and environmental impacts of the first atomic bomb test at the Trinity Site on July 16, 2017.  She explained that people have had to hold bake sales or sell cattle in order to pay for cancer treatment.

Mr. Wyndard, a Mennonite and a board member of New Mexico Interfaith Power and Light, said he was addicted to petroleum.  He called a “life destroying drug” and that we “sold creation for convenience.”

Mr. Uribe spoke of the negatives impacts of the 148 dairies to communities throughout New Mexico, including flies, dust, concerns about the safety of the drinking water, and the smells that prevent summer cookouts and other outdoor activities.  He also spoke about the nuisance lawsuit brought by attorneys who took advantage of the people and benefitted the most.  Despite it all, he said he is “proud and humble” and has a life “rich in family values.”

Ms. Assed bore witness as a privileged settler of sacred land and spoke about systematic racism.  Through her work opposing the Muslim ban and protecting freedom of speech, she has created bonds with brown and black mothers around the world.  She concluded by saying her “freedom is tied to everyone in America.”