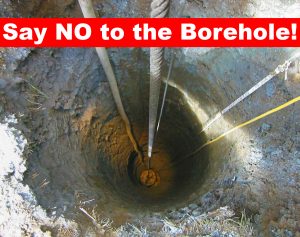 (Weed, NM, May 8, 2017) On Friday, May 12, 2017, starting at 8:45 am protesters will picket the Otero County building located at 1101 New York Avenue in Alamogordo, NM. The Otero County Commissioners will be in session discussing the Deep Borehole project. Opposition to the project is wide spread and bound to clash with the Department of Energy contractor.

Opponents to the project point to the long history of broken promises in Otero County by various federal agencies. Many do not trust DOE and believe that the “test” will become a nuclear waste disposal site.

The Deep Borehole(s) will be drilled in the controversial Otero Mesa and will penetrate the largest fresh water aquifer in New Mexico. Opponents point to DOE’s poor public safety performance (recent WIPP accident and Los Alamos pollution mismanagement are often mentioned). They argue that the possible damage to this water resource in New Mexico and Texas is not worth any claimed project benefits to nuclear waste disposal.