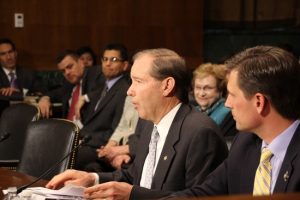 The Tularosa Basin Downwinders Consortium will release its Health Impact Assessment report entitled, “Unknowing, Unwilling, and Uncompensated:  The Effects of the Trinity Test on New Mexicans and the Potential Benefits of Radiation Exposure Compensation Act (RECA) Amendments,” on Wednesday, February 15th beginning at 6 pm at the Albuquerque Peace and Justice Center, located at 202 Harvard Drive, Southeast.  The public is invited to attend and enjoy a light dinner.

The Health Impact Assessment focuses on the harm done by the July 16, 1945 Trinity Test on New Mexicans and the potential benefits of the Radiation Exposure Compensation Act (RECA) amendments for the residents of the Tularosa Basin.

RECA, a federal law first passed by Congress in 1990, awarded financial reparations to Nevada Test Site downwinders, on-site test participants during atmospheric nuclear weapons tests, and uranium miners and millers who developed cancer and/or other specific illnesses as a result of radioactive fallout or radon gasses to which they were exposed.  Trinity Test downwinders in New Mexico were not included in the original Act, nor were they included in the amendments passed in 2000.

Residents of southern New Mexico, in particular, have historically experienced high levels of cancer and related illnesses since the first atmospheric nuclear test at the Trinity site in southcentral New Mexico.

Last month, Senator Tom Udall and Senator Martin Heinrich introduced amendments to RECA that would include New Mexico, and potentially award Trinity downwinders reparations to account for their unknowing and unwilling participation as bystanders to the Trinity test.  The proposed amendments expand RECA to provide medical benefits and other compensation to the post-1971 uranium miners, and to the people affected by testing in New Mexico, the Pacific Islands and throughout the West who are experiencing health problems due to radiation exposure.  https://www.congress.gov/bill/115th-congress/senate-bill/197

Senator Udall said, “During the Cold War, many New Mexicans and others across the West sacrificed their health and safety for our nation.  While we can’t undo the damage and suffering, it’s long past time for the federal government to provide care and fair compensation for the Americans who developed cancer and other illnesses after working in uranium mines or being inadvertently exposed to radiation from nuclear bomb testing.” 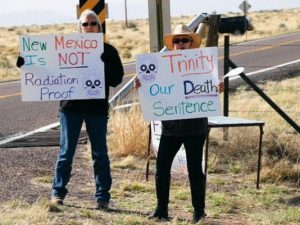 Senator Heinrich said, “Congress needs to pass the Radiation Exposure Compensation Act Amendments to provide medical assistance and compensation to those who bore the health costs of our nation’s nuclear history. I will continue to fight for the justice these communities deserve.”

Please join the Tularosa Basin Downwinders Consortium for the release of the Health Impact Assessment on Wednesday, February 15th at 6 pm at the Albuquerque Peace and Justice Center.