Celebrate Martin Luther King, Jr. on the First Anniversary of the Treaty on the Prohibition of Nuclear Weapons 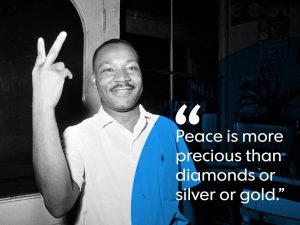 On Saturday, January 15th, we pause to honor the life of The Reverend Doctor Martin Luther King, Jr., an apostle for nonviolence.  https://nmmlksc.org/  And now that holiday is joined by another celebration, just one week later.  On January 22, 2021, the Treaty on the Prohibition of Nuclear Weapons entered into force.  https://www.un.org/disarmament/wmd/nuclear/tpnw/ 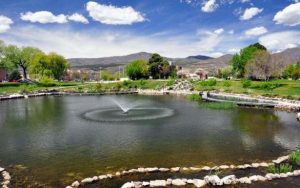 This landmark international treaty will be celebrated around the globe, including in New Mexico.  Please join CCNS http://nuclearactive.org/ , Veterans for Peace https://www.facebook.com/santafeveteransforpeace , Nuclear Watch New Mexico https://nukewatch.org/ and others on Saturday, January 22nd from 1 to 3 pm at Ashley Pond in Los Alamos to honor Dr. King and to celebrate the first anniversary of the Treaty on the Prohibition of Nuclear Weapons.

More than fifty years after his death, Dr. King is remembered as a civil rights icon.  There is no need to speculate about whether King would support the treaty.

Here are just a few of King’s statements about nuclear weapons.  [We note there are several different versions of the same MLK, Jr. quotes on the internet.] 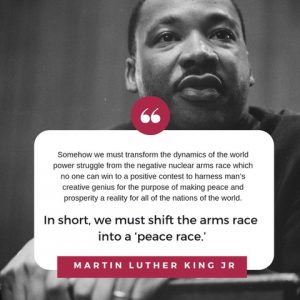 In February 1968, King said, “We have played havoc with the destiny of the world and we have brought the whole world closer to nuclear confrontation. . . . [T]he alternative to disarmament, the alternative to a greater suspension of nuclear tests, the alternative to strengthening the United Nations and thereby disarming the whole world will be a civilization plunged into the abyss of annihilation, and our earthly habitat would be transformed into an inferno that even the mind of Dante could not envision.  We have to see that and work diligently and passionately for peace.”  http://consistent-life.org/blog/index.php/2020/01/20/martin-luther-king-on-nuclear-weapons/

In April 1960, King called for his religious colleagues to join him in his denunciation of nuclear weapons.  He wrote in The Christian Century, “I am convinced that the church cannot remain silent while [hu]mankind faces the threat of being plunged into the abyss of nuclear annihilation.  If the church is true to its mission, it must call for an end to the arms race.”  https://www.christiancentury.org/article/pilgrimage-nonviolence

King’s statements about nuclear weapons could be delivered today with equal persuasiveness and even more urgency.  Now, nine nations possess nuclear weapons, including the United States, and they are deployed on hair-trigger alert around the globe.  https://www.icanw.org/nuclear_arsenals

For more information about Dr. King and the Treaty on the Prohibition of Nuclear Weapons, please visit the websites of the Oak Ridge Environmental Peace Alliance https://orepa.org/ , and the International Campaign to Abolish Nuclear Weapons https://www.icanw.org/ .  To get involved in the January 22nd celebrations, please connect with the Nuclear Ban Treaty Days of Action facebook page.

Also, check out Lorene Mills’ Report from Santa Fe interview with Don Hancock about the proposed expansion of WIPP.  They discuss the 1981 Consultation and Cooperation Agreement (C&C Agreement) between NM and DOE, which requires DOE “to provide the state and the public with information about what it is going to do, before it makes major changes to WIPP,” which DOE has not done.   http://reportfromsantafe.com/episodes/view/675/don-hancock-southwest-research-and-information-center/

2. In 2022, CCNS will continue our legal challenges of the New Mexico Environment Department’s decisions that do not protect the people and environment from activities at WIPP and LANL. Legal challenges include more permit modifications for WIPP expansion to double the size of the underground disposal area and to keep it open until 2080 and beyond – essentially FOREVER.

Importantly, the hazardous wastes permits for both LANL and WIPP expired in 2020.  NMED has administratively continued the permits, while allowing piecemeal permit modifications to be processed.  The permit renewal process opens up the entire permit for public review and comment.  In 2022 the Environment Department must release the draft hazardous waste permits for public review, comment and public hearings.  No more delays!

Your financial support is needed to keep these challenges going.  Please make an end of the year contribution to our Legal Defense Fund.  Contribute today at http://nuclearactive.org/or mail your check to CCNS, POB 31147, Santa Fe, NM  87594-1147.   Thank you! 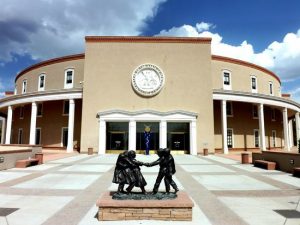