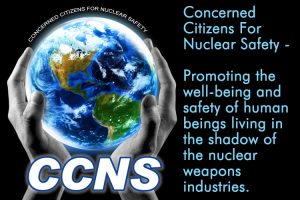 Concerned Citizens for Nuclear Safety wishes to thank you for your past support and to ask you for renewed contributions to allow us to carry on our work promoting the well-being and safety of human beings living in the shadow of the nuclear weapons industries.

It is easy to persuade politicians to spend money on weapons of war, but it is far harder to make them recognize the real costs involved.  Nuclear weapons production contaminates air and water, depletes the soil, and threatens the lives of those living and working nearby.  Economic necessity may force people to welcome the jobs these industries bring, but no one should be forced to suffer from the toxins they produce.  From those downwind from nuclear tests to those whose drinking water is polluted with toxic materials, the most affected individuals are often – although not exclusively – low-wealth and marginalized members of society.  The armed forces, the Department of Energy, National Nuclear Security Administration, and their civilian contractors have vast resources and every incentive to obscure and

hide the damage done to people whose bodies and lands are daily exposed to radioactive contamination.

Since 1988, CCNS has worked tirelessly to spotlight these concerns by all available means:  distributing public knowledge through our website and social media; raising issues in public meetings; providing information to legislators, the media and others; meeting with officials of LANL, WIPP, NNSA, the New Mexico Environment Department and other agencies of the federal, state and local government and, when necessary, by filing lawsuits.  Below, please find a list of some of our activities from the past year, all directed toward the safety and well-being of our common communities.

CCNS’s job will never be finished, and it costs money.  Government officials and contractors need to be reminded – gently or forcefully, but in either case continually – 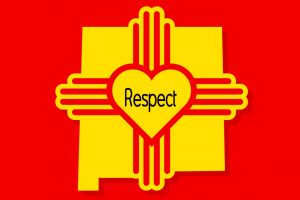 to respect the lands where they work and the people who live on them.  Please help us to keep everyone, and especially residents of Northern New Mexico, safe from the pollution generated from one the most dangerous industries on the world.  Tax-deductible donations can be sent to CCNS, Post Office Box 31147, Santa Fe, NM  87594-1147, or they can be made at our website, http://nuclearactive.org/.

Thank you for your generous support!   Together we are making a difference!

The following is a partial list of the routine work and special projects that CCNS has engaged in during 2022.  (Items in bold face have required extraordinary expense for the retention of outside counsel.)