As demanded by organizations and individuals, the New Mexico Environment Department (NMED) has scheduled a public hearing on adding a New Utility Shaft to the WIPP permit. The hearing will start at noon on Monday, May 17, 2021. Hundreds of people commented on the proposed new shaft in 2019 and 2020, and 97 percent of them objected to WIPP expansion and the new shaft.

NMED allowed the Department of Energy (DOE) to bypass the public process and start digging the new shaft with just a Temporary Authorization. But after receiving so many public comments in 2020 against the new shaft and against the Temporary Authorization, NMED stopped the construction of the shaft until after the public hearing. Public comments do make a difference! 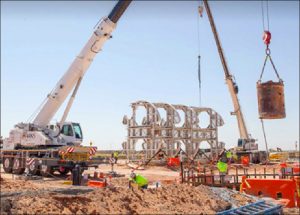 A bucketload of excavated material is lifted from the utility shaft during the Temporary Authorization period. The Galloway work platform is at center. This multi-stage platform is suspended near the bottom of the shaft during shaft sinking. (image: DOE)

You can comment now on the proposed new WIPP shaft, which is part of DOE’s plan to expand WIPP and operate it forever, instead of developing new repositories. The plan violates existing limits set in federal law, state agreements, the WIPP Permit, and DOE’s decades-old social contract with New Mexicans.

Your comments and participation can help stop the new shaft and DOE’s WIPP expansion plan!

Read on to learn more

skip to the end to see a sample comment 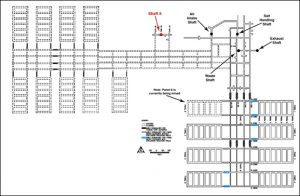 Hearing Officer Gregory Chakalian will preside over the public hearing, which will include testimony and cross-examination of several experts from DOE, NMED, and from the organizations and individuals that requested the hearing. There will also be oral comments from the public and the public can cross examine any of the witnesses.

Later in the summer, based on the regulations, the hearing record, evidence, testimony, and public comment, the Hearing Officer will issue a recommendation to approve or deny the shaft permit or to approve it with conditions. The NMED Secretary will then make the final decision, which can be appealed to the New Mexico Court of Appeals.

Details about how to watch and participate in the public hearing, either on Zoom or by phone, are provided in NMED’s Public Notice and Fact Sheet (both in English & Spanish). Simultaneous Spanish interpretation will be available on both Zoom and by phone, and interpretation into other languages may be available upon request. Future newsletters will provide more detailed information about the hearing.

Although oral public comments can only be provided during the hearing itself, anyone can submit additional written comments now and until the hearing is over.

Email comments to the NMED Hearing Clerk in Santa Fe

I join with many other people to object to WIPP expansion and the new shaft. Please deny the new shaft draft permit.

DOE has not presented the entire WIPP expansion plan to the public and to New Mexico officials. Instead, DOE is providing only a single piece of the plan – the new shaft – saying that other pieces of the plan will be presented in the future. I object to DOE’s piecemeal and illegal approach. In order to provide informed public comments, the public must be able to review DOE’s entire plan.

I know that, after examining the expansion plan, the 2020 National Academy of Sciences report stated, “An incremental approach inhibits a comprehensive review by regulators and public of the full impact of the proposed … program on a future WIPP.”

I also know that, in 2020, it was the Government Accountability Office – not DOE – that provided the public with the design of DOE’s plan to more than double the number of underground waste disposal panels.

DOE’s claim that the new shaft is needed for underground ventilation is not true. WIPP has been operating all along with just the existing four shafts. When the New Filter Building is completed, it will provide more underground ventilation than WIPP has ever had before. Instead of being just a ventilation shaft, the New Utility Shaft is actually an integral part of DOE’s expansion plans. These expansion plans must be a part of the public hearing.

(Your Name, Address and Date)