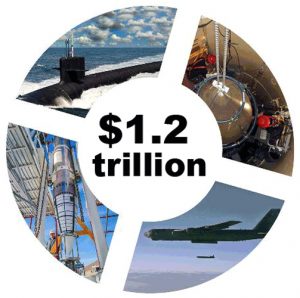 This week, the Congressional Budget Office (CBO) released a $1.2 trillion estimate for the maintenance and modernization of the nuclear weapons complex over the next 30 years.  Unfortunately, the report, entitled, “Approaches for Managing the Costs of U.S. Nuclear Forces, 2017 to 2046,” did not take inflation into account.  If inflation is included, the price tag would exceed $1.5 trillion.  https://www.cbo.gov/publication/53211

The report summary begins with these statements, “To continue to field a nuclear force roughly the same size as it is today, the United States plans to modernize virtually every element of that force over the coming decades.  The Congressional Budget Office estimates that the most recent detailed plans for nuclear forces, which were incorporated in the Obama Administration’s 2017 budget request, would cost $1.2 trillion in 2017 dollars over the 2017 [to] 2046 period:  more than $800 billion to operate and sustain (that is, incrementally upgrade) nuclear forces and about $400 billion to modernize them.”

The report continues, “That planned nuclear modernization would boost the total costs of nuclear forces over 30 years by roughly 50 percent over what they would be to only operate and sustain fielded forces, CBO estimates. During the peak years of modernization, annual costs of nuclear forces would be roughly double the current amount. That increase would occur at a time when total defense spending may be constrained by long-term fiscal pressures, and nuclear forces would have to compete with other defense priorities for funding.” 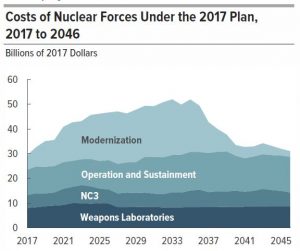 Jay Coghlan, of Nuclear Watch New Mexico, responded to the report, saying, “The American public is being sold a bill of goods in so-called nuclear weapons modernization, which will fleece the taxpayer, enrich the usual giant defense contractors, and ultimately degrade national security.  Inevitably this won’t be the last major price increase, when the taxpayer’s money could be better invested in universal health care, natural disaster recovery, and cleanup of the Cold War legacy wastes.  Nuclear weapons programs should be cut while relying on proven methods to maintain our stockpile as we work toward a future world free of nuclear weapons. That is what would bring us real security.”  https://nukewatch.org/pressreleases/PR-CBO-10-31-17.pdf

Other responses to the report include:

“Senator Markey:  Nuclear Modernization is a Budget Boondoggle,” at https://www.markey.senate.gov/news/press-releases/senator-markey-nuclear-modernization-is-a-budget-boondoggle

“Overindulging in Overkill,” by Kathy Crandall Robinson, at https://www.wand.org/2017/10/29/overindulging-in-overkill/