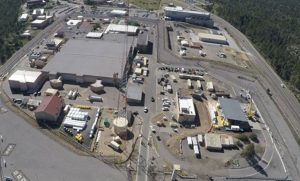 Nearly 30 years ago, the Defense Nuclear Facilities Safety Board began communications with the Department of Energy (DOE) about ventilation systems in nuclear facilities, saying that they must contain or confine radioactive materials during an accident or seismic event that might be followed by a fire.  https://www.dnfsb.gov/sites/default/files/document/9286/TECH-34_0.pdf 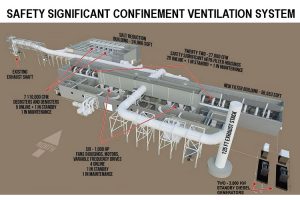 Over the decades, DOE indicated that it would install the active confinement ventilation system in the Plutonium Facility.  But delays, LANL shutdowns, and the development of new standards and procedures have resulted in continuing reliance on a non-compliant passive ventilation system.

As far back as 2004, the Board described a passive confinement ventilation system as “not necessarily capable of containing hazardous materials with confidence because they allow a quantity of unfiltered air contaminated with radioactive material to be released from an operating nuclear facility following certain accident scenarios.”  Id., Recommendation, p. 1. 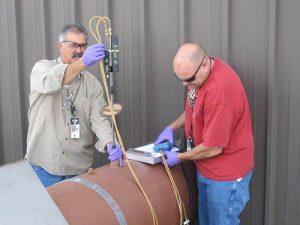 By contrast, the Board described safety [class] active confinement ventilation systems as continuing “to function during an accident, thereby ensuring that radioactive material is captured by filters before it can be released into the environment.”  Id.

This distinction is important because on November 24, 2021, the Board requested information about DOE’s strategy for the Plutonium Facility ventilation system.  https://www.dnfsb.gov/documents/letters/conceptual-design-los-alamos-plutonium-pit-production-project

On March 15, 2022, DOE replied stating it “is committed to strong and effective safety systems at [the Plutonium Facility].  The current path forward includes modifying individual components to achieve a more robust ventilation system but will not achieve Safety Class Active Confinement Ventilation.”  https://www.dnfsb.gov/documents/letters/doe-response-dnfsb-letter-nov-24-2021-re-lanl-pu-pit-production-project

What does this mean to you?  It means that DOE is not following the applicable laws, regulations and its own nuclear safety orders and standards and as a result is threatening your health and safety.

DOE is renovating the 1970s era Plutonium Facility on a 24/7 schedule, installing new equipment, and attempting to increase the fabrication of plutonium pits, the cores of nuclear weapons, from 10 to 30 annually.  These multiple activities exacerbate the threats to workers and the public.  This is exactly the time when a safety class active confinement ventilation system should be installed. 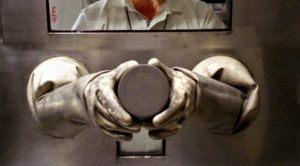 CCNS urges you to contact your elected officials to ask for an investigation into why DOE is not complying with the applicable nuclear safety laws and regulations that require a safety class active confinement ventilation system in the Plutonium Facility.

Potential releases could result in a 3,175-rem dose to individual members of the public.  A rem (roentgen equivalent man) is a measure of health effects on the human body from exposure to ionizing radiation.  A total body exposure of 400-rem would cause radiation sickness and death in half of the individuals exposed.  If the individuals did not receive medical treatment, most of the individuals would die within 30 days.  https://medlineplus.gov/ency/article/000026.htm    https://www.dnfsb.gov/sites/default/files/document/25541/Los%20Alamos%20Week%20Ending%20April%201%202022.pdf 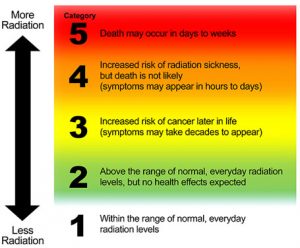 In 2004, the Board restated its concerns that it appeared that DOE was “using the evaluation guideline of 25 rem exposure at the site boundary as a design criterion and an allowable dose to the public.”  The Board continued:

This is contrary to the Board’s July 8, 1999 letter to the Deputy Secretary of Energy that states “the 25 rem evaluation guideline is not to be treated as a design acceptance criterion nor as a justification for nullifying the general design criteria relative to defense-in-depth safety measures.”

It is also contrary to DOE-STD-3009 that states that the 25 rem evaluation guideline “is not to be treated as a design acceptance criterion.”  However, the Board continues to see 25 rem at the site boundary used as an acceptance criterion for the performance of confinement systems. The Board is concerned that in these examples DOE and its contractors are underestimating the significance of the performance requirements for a confinement ventilation system and are relying on questionable calculations of offsite doses to evaluate performance.  [Emphasis added.]

The Board reiterates that the 25 rem evaluation guideline is solely to be used for guidance for the classification of safety controls, and not as an acceptable dose to the public for the purpose of designing or operating defense nuclear facilities.

The Board, in its April 2022 Annual Report to Congress, states many more concerns about the Plutonium Facility and nuclear weapons operations at LANL.  https://www.dnfsb.gov/documents/reports/reports-congress/32nd-annual-report-congress 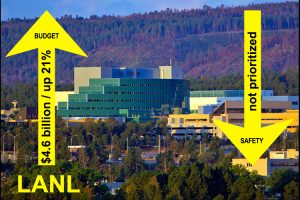 In a mere seven years, the budget requests for LANL have more than doubled.  Nevertheless DOE has not prioritized the health and safety needs of the workers and the public to upgrade the Plutonium Facility passive ventilation system to a safety class active confinement ventilation system.