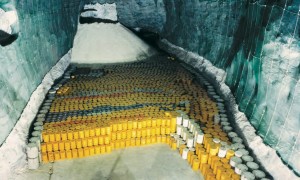 In its ongoing efforts to expand the mission of Waste Isolation Pilot Plant (WIPP), the Department of Energy (DOE) this week gave itself permission to bring more plutonium under a proposal to deal with some of the 13 metric tons of declared “surplus plutonium.”   The DOE’s Record of Decision addresses only six metric tons, or 6.6 tons, of surplus, weapons-usable, non-pit plutonium. DOE did not make a decision about the remaining 7.1 metric tons of surplus plutonium from the triggers for nuclear weapons, or the pits, currently stored at the Savannah River Site (SRS), but has indicated that plutonium also could be shipped to WIPP. http://energy.gov/nepa/downloads/eis-0283-s2-record-decision

DOE would use existing SRS facilities to prepare and package the plutonium for shipment to WIPP for disposal with other contact-handled transuranic waste. WIPP is currently closed for disposal due to the February 2014 vehicle fire and the explosion of one or more waste containers, which contaminated the underground. After many delays in its attempt to reopen WIPP, DOE said it would partially reopen in December 2016. DOE does not have a timeline for when the SRS shipments would begin.

DOE states that approximately 15 percent of the plutonium could be from foreign countries, as recently demonstrated by the shipments of Japanese and British plutonium to SRS. Nevertheless, foreign plutonium is prohibited at WIPP. http://www.srswatch.org/ and http://www.channelnewsasia.com/news/asiapacific/japan-sends-331-kg-of-wea/2626026.html

South Carolina Governor Nikki Haley has protested using SRS for storage of foreign plutonium. Since January 1st, South Carolina has proposed, but not collected, fines from DOE of $1 million a day for not removing the stored plutonium. http://www.washingtonexaminer.com/gov.-nikki-haley-forces-feds-to-move-plutonium/article/2587163

New Mexico Senators Tom Udall and Martin Heinrich weighed in on DOE’s decision. Senator Udall said, “If DOE moves forward with this plan, the state of New Mexico and Congress will need assurances that this proposal fully complies with WIPP’s disposal criteria and with the Land Withdrawal Act.”