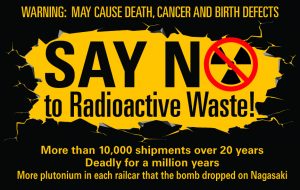 The Nuclear Regulatory Commission (NRC) will host two more scoping meetings in New Mexico early next week.  Your attendance is needed to tell the NRC that New Mexicans do not consent to the proposed Holtec project to bring all of the commercial high-level radioactive waste from across the country to a site in southeast New Mexico for storage.  Dozens of people stated that they do not consent to the Holtec proposal at the previous meetings in Roswell, Hobbs, and Carlsbad.

The second meeting will be held in Albuquerque on Tuesday, May 22nd from 6 to 9 pm at the Crowne Plaza, located at 1901 University Boulevard, from 6 to 9 pm.  https://adamswebsearch2.nrc.gov/webSearch2/view?AccessionNumber=ML18134A284

The 960-acre proposed site, containing playa lakes, is located half way between Hobbs and Carlsbad.  Holtec, a limited liability corporation, is asking NRC for a 40-year license to store the waste in Lea County, with an opportunity to extend the license to 120 years.  Holtec stated in its license application that the waste could be stored there for 300 years.

Over 10,000 overweight rail cars would carry the dangerous waste from across the country to the proposed site and the waste would likely travel very near to the Carlsbad sinkhole.  Links to maps of the proposed rail routes are available at http://www.state.nv.us/nucwaste/whatsnew.htm

Many along the national transportation routes are concerned that NRC has not provided the same number of meetings as they did for the proposed Yucca Mountain site in Nevada. 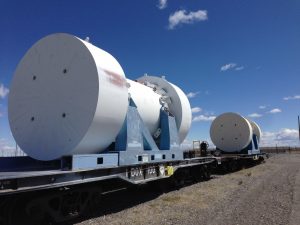 The memorial begins, “Whereas, the City owns and operates a number of Community Centers, Health and Social Services Centers, Senior/Fitness Centers, and Multigenerational Centers throughout the City; and Whereas the City of Albuquerque is committed to protecting the health, welfare, safety, and security of its residents.”  It then details the danger of shipping the waste by rail.  Albuquerque Memorial M-1  and  City Council Speak Out

The Alliance for Environmental Strategies invites you to support its passage.  http://nonuclearwasteaqui.org/   For more information, please contact Janet Greenwald at 505-266-2663.