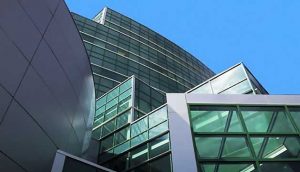 The privileges of the rich and powerful Los Alamos National Laboratory (LANL) and its plans to expand the fabrication of plutonium pits, or triggers, for nuclear warheads continue. 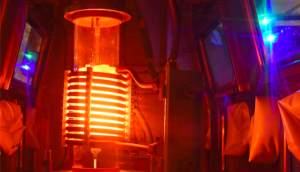 After 115 non-governmental organizations and individuals requested a two-month extension of time for preparation of informed scoping comments for a long-delayed draft sitewide environmental impact statement (SWEIS), LANL granted a whopping 15-day extension.  Scoping comments are now due by Tuesday, October 18th.  If you plan to email your comments, submit them before 11:59 pm Mountain time.

CCNS attended the two virtual scoping meetings this week to make comments and to renew the request for a longer extension of the comment period.

Broad and diverse comments were made about the impacts of expanded operations to frontline communities, equity, environmental and social justice, environment, health, water, wildfire, cleanup and related issues.  Some commenters said LANL was no longer welcome. 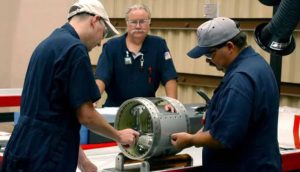 Comments were made about the proposed transportation of 48 metric tons of plutonium pits from the Pantex site north of Amarillo, Texas to LANL for processing into powdered plutonium.

Under the National Environmental Policy Act (NEPA), LANL is required to examine all the alternatives to its preferred course of action.  We learned that LANL has inserted its program of fabricating 30 plutonium pits per year into its proposed No Action Alternative. What does this mean?  It may mean that LANL will proceed according to the last SWEIS, finalized in 2008.  We’ll have to wait and see what’s in the draft SWEIS.

Over the last 14 years, many changes have occurred.  Below is a short list and does not include the issues raised by the Defense Nuclear Facilities Safety Board ( https://www.dnfsb.gov/ ):

Commenters struggled to orient themselves in the virtual zoom meeting.  The view and chat functions were disabled, leaving the viewer unable to do more than to view the presentation.  CCNS and others argued against only holding virtual meetings.  It should have been a hybrid with people being able to be seen on the screen and in person.  By disabling the view and chat, people were unable to communicate as would have been done during an in-person meeting. 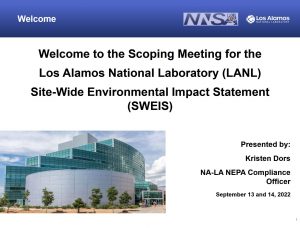 While the 30-minute LANL presentation was not recorded, the powerpoint is available at https://www.energy.gov/nepa/doeeis-0552-site-wide-environmental-impact-statement-continued-operation-los-alamos-national-0 . The public comment portion was recorded, but when asked, LANL explained that it would not be publicly available.

CCNS asked in the Q&A function whether the public would have to request the transcript through the Freedom of Information Act.  There was no response.

CCNS and other NGOs are preparing sign-on letters for NGOs and sample public comments you can use as a model for your scoping comments.  Stay tuned!