From December 2nd to 4th, more than 80 activists from around the country gathered in Chicago, Illinois to address the nation’s commercial high-level radioactive waste issues.  People attended from dozens of nuclear power reactor areas where highly radioactive waste is located now; as well as from New Mexico, Texas, and Nevada communities being targeted for new nuclear waste sites; and from along transport routes.  There were also participants from Canada where there are similar problems and from the Marshall Islands, where severe contamination and health problems persist from U.S. nuclear weapons testing.

The Summit included presentations from grassroots people and experts, as well as strategy sessions for activities in the upcoming year and beyond. There was agreement on the unsuitability of the proposed Yucca Mountain, Nevada site, and continuing strong opposition to any efforts by Congress or the new administration to proceed with that site. Representatives of the Western Shoshones also discussed how the site is totally contrary to their historic and treaty rights to the proposed site. That more than 40 states would be impacted by transporting waste to Yucca Mountain is another major concern.

Representatives from Texas and New Mexico provided information about their “non-consent” to, and the unsuitability of, the proposed consolidated storage sites at Waste Control Specialists, located on the Texas-New Mexico state line near Eunice, New Mexico, and the Holtec site near Hobbs, New Mexico. The Summit attendees agreed that people across the country would also oppose those sites and the transportation through many states that would be required.

Summit participants also agreed with people living near nuclear power plants that the irradiated fuel must be more safely stored. Pools where waste is too densely stored pose risks of major accidents that could affect millions of people. On-site storage in thin-walled casks that cannot be adequately inspected or repackaged when they leak also pose risks of significant releases. Such storage does not adequately protect from accidents, natural disasters, or terrorist attacks.

There was agreement that more robust on-site storage is needed now, including reducing the amount of waste in pools and using thick-walled containers to store waste in buildings that are protected, rather than the existing open air pads. 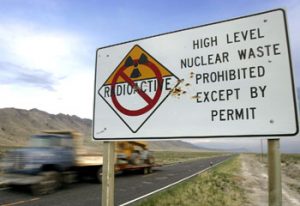 Rose Gardner, from Eunice, New Mexico, attended the Summit.  She said, “The country to ready to clean up the mess that’s been created. Since there is no permanent repository, and consolidated storage is not an acceptable option, we need to isolate radioactive waste more safely around reactor areas until there are safe disposal options. Further, environmental justice requires protection of people of color communities that must be addressed by the Nuclear Regulatory Commission and nuclear corporations.”