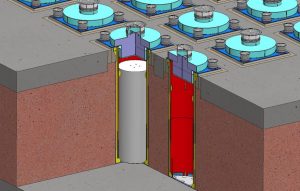 The New Mexico State Board of Finance approved the sale of 1,000 acres by the Eddy Lea Energy Alliance (ELEA) to Holtec International for a possible consolidated storage facility for much of the nation’s commercial spent high-level radioactive waste fuel generated in nuclear power plants.  The Board of Finance approval to sell the site to Holtec by July 31, 2017 is contingent upon an appraisal and other matters.  See Agenda Item 14, p. 2 at http://www.nmdfa.state.nm.us/uploads/files/Board%20of%20Finance/2016/July/7_19_16%20Actions%20Corrected.pdf

The site is located in Lea County, midway between Carlsbad and Hobbs, on Highway 62.  The site is now owned by the Alliance, a limited liability corporation composed of the Lea County Commission, Hobbs City Council, Eddy County Commission, and Carlsbad City Council.  In 2006, the Alliance proposed the site for nuclear fuel reprocessing, which never occurred because it is not economically viable and creates large amounts of waste.  http://www.world-nuclear-news.org/WR-Plans-announced-for-New-Mexico-used-fuel-store-3004154.html

In a September 13, 2016 release, Holtec stated, “The Holtec-ELEA Team has tremendous State and local support and consent.”  http://www.holtecinternational.com/2016/09/strong-support-for-the-hi-store-consolidated-interim-storage-facility-in-new-mexico/  The company has delayed the submission of its license application to the Nuclear Regulatory Commission until sometime in 2017.  The details of its plans will not be known until the application is made public.

Nevertheless, bringing waste to the privately owned site cannot happen without Congress substantially changing the 35-year-old Nuclear Waste Policy Act and providing billions of dollars to pay for the site’s operations and transportation of thousands of railcar loads of waste from across the nation.

In May 2015, when the Alliance and Holtec announced that they planned to build the storage facility, New Mexico U.S. Senators Tom Udall and Martin Heinrich opposed the proposal.  Senator Udall stated, “Several aspects of this proposal concern me.  No matter where it’s built, I will not support an interim disposal site without a plan for permanent disposal [of the waste].”  http://www.tomudall.senate.gov/?p=press_release&id=1947

Senator Heinrich agreed and said, “But we can’t put the cart before the horse.”  http://www.tomudall.senate.gov/?p=press_release&id=1947 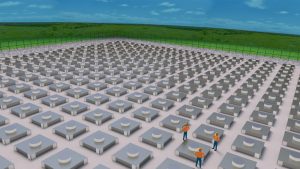 There is strong local and statewide opposition to the plan. Noel Marquez, of Artesia, expressed his concern, “As a citizen of Eddy County who does Not Consent to bringing the waste to our region, I am extremely disappointed to see my community expressing No Consent rendered invisible and our beautiful lands proposed as a permanent Wasteland for the Nuclear Industry.”

A resident of Hobbs, Mena Ramos, said, “I’m not well informed on that but it is scary to know that that is coming to our town.”

Don Hancock, of Southwest Research and Information Center in Albuquerque, stated, “The large majority of New Mexicans, like people in other states, do not support consolidated storage. The nuclear utilities must provide safe storage for their waste at their sites.”  http://www.sric.org/