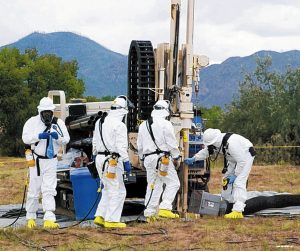 The New Mexico Environment Department released a draft Compliance Order on Consent, or the Cleanup Consent Order, for Los Alamos National Laboratory (LANL) for a limited 45-day public review and comment period.  The hazardous waste regulations require at least a 60-day comment period for this type of document.

Sample public comments that you can use are available at nuclearactive.org.

A few of the general purposes of the order are to “provide a framework for current and future actions to implement regulatory requirements;  … drive toward cost-effective work resulting in tangible, measurable environmental clean-up, … and provide for effective public participation.”  https://www.env.nm.gov/HWB/documents/ConsentOrder_Main_Document.pdf, see Sec. II.B, p. 4.  The Environment Department is failing at effective public participation by not providing at least a 60-day comment period.

The Environment Department states this draft will “supersede” the Consent Order signed on March 1, 2005 by representatives of the Department, the New Mexico Attorney General, the Department of Energy (DOE) and the LANL contractor, the Regents of the University of California.  https://www.env.nm.gov/HWB/documents/ConsentOrder_Main_Document.pdf, see Sec. II.A, p. 4.

This draft Consent Order is a complete replacement of the 2005 order, requiring additional time for public comments.

Back in the spring of 2002, when the first Consent Order was released for public comment, the Environment Department provided a 60-day public comment period, as required by regulations governing the handling and storage of hazardous waste.  But the Martinez Environment Department has cut that time to 45-days for a document that is over 200 pages long that essentially revokes the 2005 order.

The draft order substantially changes the focus of cleanup from individual work at specific sites to a broad “campaign approach” that was used to expedite shipping of plutonium-contaminated waste from LANL to the Waste Isolation Pilot Plant (WIPP).  One or more of those drums exploded in WIPP causing it to shutdown for over two years.  Over 600 potentially exploding drums are currently disposed of at WIPP.

On Wednesday, May 18th, from 2 pm to 4 pm, Environment Department Secretary Ryan Flynn will discuss the public comments received at an afternoon meeting of the Northern New Mexico Citizens’ Advisory Board.  It will be held at the Cities of Gold Conference Center in Pojoaque.  http://energy.gov/em/nnmcab/downloads/nmed-revised-lanl-consent-order-draft-march-2016  It is unclear whether the Department will provide written responses to the public comments as has been done in the past with previous draft Consent Orders.

Your comments should be submitted to Kathryn Roberts, Director of the Resource Protection Division of the Environment Department at Kathryn.roberts@state.nm.us.

To view the proposed draft 2016 Consent Order with its appendices, go to:  https://www.env.nm.gov/HWB/documents/ConsentOrder_Main_Document.pdf

Appendix B – Milestones and Targets – https://www.env.nm.gov/HWB/documents/APPENDIXA_SWMUAOCStatusList.pdf