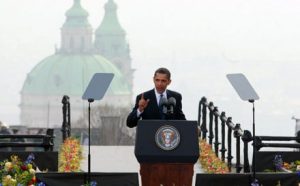 Over fifty religious leaders from across the United States including the three Roman Catholic Bishops in New Mexico, where at the Trinity Site in the Tularosa Basin the first denotation of an atomic bomb took place on July 16, 1945, have signed a letter to President Obama urging him to keep his promise to advance international nuclear disarmament before he leaves office.  a-Final-Letter-to-Obama-on-Disarmament-1

The letter comes as President Obama is preparing for a May 27 visit to Hiroshima in Japan, a city devastated by an atomic bomb on August 6, 1945. The letter reminds President Obama of the promise he made to the global community in his Prague speech in April of 2009 that one of his highest priorities would be to seek “the peace and security of a world without nuclear weapons.”

The urgency shared by these religious leaders is captured in a quote from the writer James Agee, who wrote in Time Magazine just days after the bombing of Hiroshima and Nagasaki, “…the demonstration of power against living creatures instead of dead matter created a bottomless wound in the living conscience of the race.”

The compelling words of Pope Francis are cited as well: “Nuclear deterrence and the threat of mutually assured destruction cannot be the basis for an ethics of fraternity and peaceful coexistence among peoples and states….Now is the time to counter the logic of fear with the ethic of responsibility, and so foster a climate of trust and sincere dialogue.”

The religious leaders who signed the letter call into question the movement underway to overhaul and modernize US nuclear forces at a cost of $1 trillion dollars over the next decade, asking how this plan can be squared with President Obama’s priority in his Prague speech to reduce the role of nuclear weapons in our national security strategy while urging other nations to do the same.

Signatories along with Catholic Bishops Most Reverend John C. Wester, Most Reverend Oscar Cantú, and Most Reverend James Wall include top leaders of the United Methodist Church, the Presbyterian Church (U.S.A.), the Christian Church (Disciples of Christ), the Church of the Brethren, the Central Conference of American Rabbis, Unitarian Universalists, the Alliance of Baptists, and the Presidents of Union Theological Seminary and Auburn Theological Seminary in New York and the President of the National Council of Churches.

Representing a wide spectrum of religious life in America, they are united in their commitment to prayer and study and specific actions that can treat “the bottomless wound” in the living conscience of the human race. One of the drafters of the letter, the Rev. James D. Brown of Santa Fe, NM, expresses his “gratitude for the remarkable support of the letter by diverse religious leaders at a time when American life is so often marred by divisiveness and sectarianism. This witness of solidarity is something we hope will inspire and encourage President Obama as he makes his way to Japan.”

To read the letter, a Final Letter to Obama on Disarmament-1