The Multicultural Alliance for a Safe Environment (MASE) is organizing a Uranium Workers’ Day at the New Mexico State Capitol for Monday, February 27th, in order to raise awareness about the continuing health and environmental impacts from uranium mining faced by many New Mexicans.  https://swuraniumimpacts.org/uranium-workers-day-february-27-2017/  Navajo Nation President Russell Begaye will attend the event.  Laguna Pueblo President Virgil Siow will be unable to attend, but will send the Pueblo Tribal Secretary in his absence.

Beginning at 10 am, MASE will hold a training about how to lobby your state senators and representatives.  It will be held at the Garrett’s Desert Inn, located at 311 Old Santa Fe Trail.  At noon, a press conference in the Capitol Rotunda will be held.

Participants will then speak with their state senators and representatives about their concerns and show support for Senator John Pinto’s Senate Memorial 85 https://www.nmlegis.gov/Legislation/Legislation?Chamber=S&LegType=M&LegNo=85&year=17 and Representative Wonda Johnson’s House Memorial 40  https://www.nmlegis.gov/Legislation/Legislation?Chamber=H&LegType=M&LegNo=40&year=17  The memorials call for the expansion of compensation and health care for uranium workers, Trinity Test Downwinders and New Mexicans as proposed in the recently introduced U.S. Senate Bill 197 that amends the federal Radiation Exposure Compensation Act (RECA).  https://www.congress.gov/bill/115th-congress/senate-bill/197 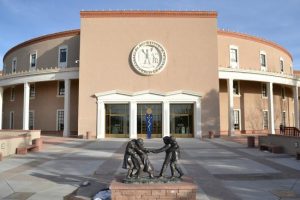 RECA is a federal law originally passed by the United States Congress in 1990 to award financial reparations to downwinders of the above-ground atomic tests at the Nevada Test Site, on-site test participants during atmospheric nuclear weapons tests, and uranium miners and millers who developed cancer and/or other specific illnesses as a result of radioactive fallout or radon gasses to which they were exposed.  Radon gasses are found in uranium mines.

U.S. Senate Bill 197 expands RECA to include the uranium miners and millers who worked after 1971, as well as the Trinity test downwinders and New Mexicans exposed to radiation.  It is co-sponsored by Senator Tom Udall and Senator Martin Heinrich of New Mexico.  A companion bill will be introduced in the U.S. House of Representatives the week of February 27th.

Representative Johnson’s House Memorial 40 is scheduled to be heard on Thursday, February 23rd at 8:00 am before the House State Government, Indian and Veterans’ Affairs Committee in the New Mexico State Capitol, Room 309.  Please join MASE in support of House Memorial 40.

For more information, please contact Susan Gordon, Coordinator for MASE, at sgordon@swuraniumimpacts.org, or 505 577-8438.