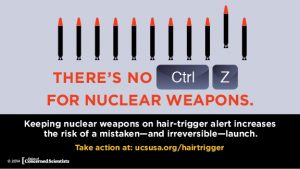 Despite promises made during their presidential campaigns, neither George W. Bush nor Barack Obama took U.S. land-based nuclear weapons off hair trigger alert.  With the possibility of a Trump presidency, there are two executive actions President Obama could take to reduce the risks of nuclear war.  Currently, U.S. nuclear weapons are on “hair trigger alert” and ready to launch 24/7.  President Obama could put them in maintenance mode that would provide additional time for information to be compiled before the president, as the sole decider, could launch nuclear weapons in retaliation to a nuclear attack.  He could also declare that the U.S. would never again be the first to use nuclear weapons, as the U.S. did in Hiroshima and Nagasaki near the end of World War II.

It is time for President Obama to fulfill his campaign promise and the promises he made in 2008 in Prague to reduce the nuclear danger.  He said then, “As the only nuclear power to have used a nuclear weapon, the United States has a moral responsibility to act.  We cannot succeed in this endeavor alone, but we can lead it, we can start it.  So today, I state clearly and with conviction America’s commitment to seek the peace and security of a world without nuclear weapons.”

There are approximately 16,000 nuclear weapons in the world and between the U.S. and Russia about 1,800 remain on hair trigger alert.  Currently, U.S. nuclear weapons may be launched through a “triad” of submarines, bombers, and land-based missiles, such as the Minuteman IIIs.

Joni Arends, of CCNS, said, “We will state the obvious – a President Trump with the nuclear codes scares the bejeebers out of us.  President Obama has the executive power to declare an official U.S. no-first-use policy and to remove 450 land-based nuclear weapons from hair trigger alert.”

She continued, “During this time of giving, please take a few minutes to urge President Obama to reduce the threat of nuclear war.  Two non-governmental organizations, the Union of Concerned Scientists and Physicians for Social Responsibility, have campaigns to assist you.  Children and future generations thank you for taking action today.” 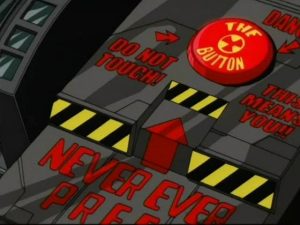 The Union of Concerned Scientists promotes “science for a healthy planet and safer world.”  It has extensive materials on its website about taking nuclear weapons off hair trigger alert, including a short animated video and an on-line letter.  http://www.ucsusa.org/nuclear-weapons#.WFNxGoVcNP4 and https://youtu.be/2x_57sE1_LQ

Founded in 1961, the Physicians for Social Responsibility documented radioactive strontium-90 from above-ground testing of nuclear weapons in baby teeth.  It has extensive materials on its website about no-first-use of nuclear weapons and the humanitarian consequences of nuclear war.  http://www.psr.org/nuclear-weapons/ and https://youtu.be/Pk5IT9ehh68