Cleanup at LANL’s Area G May Not Begin Until 2028 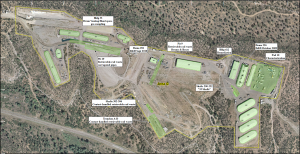 The release of several documents over the last couple of weeks reveals that even though the 63-acre Area G dump at Los Alamos National Laboratory (LANL) was supposed to be “cleaned up” by December 31, 2015, the new projected cleanup date to begin work may not be until 2028, at the earliest, 13 years after it was supposed to be finished.  The December 2015 cleanup date was established by the 2005 Compliance Order on Consent, or Consent Order, agreed to by the New Mexico Environment Department and the Department of Energy (DOE) and its contractor, the University of California.  https://www.env.nm.gov/HWB/documents/LANL_10-29-2012_Consent_Order_-_MODIFIED_10-29-2012.pdf

On June 24, 2016, the Department and DOE agreed to a new Consent Order, but this time without the opportunity for the public to request a formal hearing.  https://www.env.nm.gov/HWB/lanlperm.html   In July, Nuclear Watch New Mexico sued the Department, DOE and its contractor over this and other issues.  http://www.nukewatch.org/cleanuplawsuit.html

Technical Area 54, where the dumps at Areas G, H and L are located, first started receiving hazardous, toxic and radioactive waste in the late 1950s, which were disposed of in unlined pits, trenches and shafts in the volcanic tuff.  Some of the trenches are 65 feet deep and the waste is buried in layers, like a cake.

Pollutants have been found in the ground water below Areas G and L, which threaten the drinking water for Los Alamos County and Santa Fe.  None of the recently released documents explain how the regional drinking water aquifer will be protected while there are more cleanup delays.

On October 12th, the new DOE Environmental Management Field Office at LANL sent a letter notifying the Department of their withdrawal of the cleanup reports for Areas G, H, and L, which were submitted in 2011, stating that based on its life-cycle cost estimate and the need for the dumps to be available, it will submit new cleanup reports at some undetermined date.  doe-em-withdrawal-3-cleanup-plans-areas-g-h-l-10-12-16

Further, the new DOE Request for Proposal for cleanup of the LANL legacy waste reveals that preparing the cleanup documents will begin in 2026, with work possibly beginning in 2028.  https://www.emcbc.doe.gov/SEB/LLCC/rfppage.php, see September 21, 2016 cover letter, and at the bottom of the page, Amendment 001, Section L Red-line at p. 69.  It is anticipated that regardless of when the documents are released, the public will request a formal hearing.

Scott Kovac, of Nuclear Watch New Mexico, said, “It’s a disservice to make Northern New Mexico wait 13 more years for a “cleanup” that will probably want to leave most of the waste in the ground under a soil cap. The only way to completely protect the regional aquifer is to characterize the waste and remove the sources of the contamination. Then we’ll know what needs to be done. We expect more out of the world’s smartest scientists than a plan to cap the dumps.”

To learn about DOE’s cleanup plans for LANL legacy waste in the coming year, as well the completed and current work, please plan to attend the public meeting hosted by the New Mexico Environment Department and DOE’s Environmental Management at Los Alamos Field Office on Wednesday, November 16, 2016 from 5 pm at Fuller Lodge, in downtown Los Alamos.  https://www.env.nm.gov/wp-content/uploads/2016/01/161103PR-COAnnualPlanningPubMtg161116.pdf