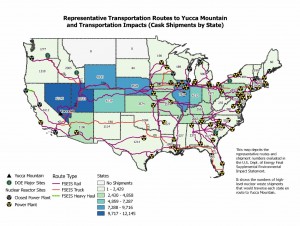 Tuesday April 26, on the 30th commemoration of one of history’s catastrophic releases of radioactivity from Chernobyl Unit 4 reactor in the former Soviet Union, the US Department of Energy (DOE) is holding a public meeting in Sacramento to under-pin its program to expand nuclear energy. First goal: get the nation’s highly radioactive waste on to trucks and trains, moving off nuclear reactor sites to one or more “consolidated storage” sites. In order to achieve the goal of moving so-called “spent” nuclear fuel from the power generating sites where it was made, the DOE must get Congress, currently divided on the next step for this waste, to pull together and change the law. This meeting, fourth in a nation-wide series of nine is designed, perhaps, to reassure law makers that the “public” has been “consulted.”

The meeting, at the Holiday Inn Capitol Plaza, 300 J Street, Sacramento, CA 95814 begins at 4 pm with an open house. The meeting will convene at 5 pm and will also be live web-cast with webinar features. See: http://www.energy.gov/ne/downloads/meeting-materials-consent-based-siting-public-meeting-sacramento-april-26-2016

“In order to move this most deadly of wastes any time soon, DOE will ask Congress to gut any remaining protections in the existing law,” said Mary Olson, Southeast Coordinator for Nuclear Information and Resource Service who on April 10th attended another of the DOE’s public meetings, in Atlanta GA. “The Nuclear Waste Policy Act requires a licensed permanent site for the waste before the DOE can take the waste anywhere. It keeps liability with the waste generator until the real, long-term problem of what to do with this waste has been solved. This makes sense, especially when the hazard of transporting the waste is multiplied by adding a “temporary” site to the plan.” NIRS calls this “Fukushima Freeways” since the shipments would carry the same material, irradiated nuclear fuel, as spewed from the Fukushima Daiichi reactors five years ago. Under some accident scenarios, local areas could be contaminated just like Fukushima Prefecture. See: http://www.nirs.org/fukushimafreeways/stopfukushimafreeways.htm

“Concerned Citizens for Nuclear Safety (CCNS) is based in Santa Fe, New Mexico, a state with no nuclear power plants, but with a long history of having DOE and its corporate contractors break their promises of safety at Los Alamos National Laboratory and the Waste Isolation Pilot Plant (WIPP). DOE also has tried to ignore federal and state laws that limit WIPP’s mission. New Mexico has for decades told DOE and nuclear corporations that it DOES NOT CONSENT to irradiated fuel being stored or disposed in the state. DOE’s “consent-based siting” is a sham, since it wants to offer incentive packages for volunteer sites, including to a few people with the Eddy-Lea Energy Alliance in southeastern New Mexico and the nuclear corporation Holtec. Congress should not provide funding for the incentives, and DOE should publicly affirm that states that do not consent will be excluded from any future nuclear facility siting processes,” said Joni Arends of CCNS, who will be attending the Tuesday meeting.

A second site, only miles away in West Texas is also being proffered by Energy Solutions / Waste Control Specialists, where, like New Mexico, many people oppose “consolidated storage” because it is unnecessary and dangerous to the local communities all along the transportation routes.

“We do not consent to the plan to dump dangerous radioactive waste on us,” said Rose Gardner a SEED Coalition member who lives in Eunice, New Mexico, a town of nearly 3000 people that is 40% Hispanic. It lies five miles west of the WCS site. “Andrews County officials say that we want this waste, but no one has ever asked me if I consent. I would definitely say no, and many others here feel the same way. We never got to vote on this issue. The Department of Energy (DOE) is saying that our community consents to having radioactive waste dumped in our backyard, but this isn’t true. The DOE scheduled eight hearings around the country, but not a single one for New Mexico or Texas, the targeted region. Clearly they don’t want to hear our voices.”

Michael Welch, spokesperson for Redwood Alliance in Arcata, CA said, “Here in Humboldt County, CA, we have a nuclear power plant that has nearly completed the decommissioning process. With no rail lines, roads into and out of the area are so narrow and twisting, and they closely follow important bodies of water, that it makes waste transportation especially hazardous. Local citizens have worked with the utility to store the high level waste, on the reactor site to avoid that dangerous transportation. DOE would undercut our local effort to keep the waste as safe as possible, while increasing dangerous transport across the nation.”

“Nuclear power reactors have generated both electricity and this waste over the last 40 years. We still don’t know how to keep it safe for a million years. An energy policy based on making more just does not make sense when we have better alternatives,” said Olson, NIRS Southeast Office.