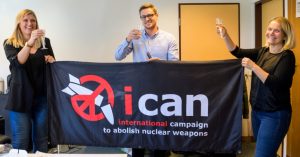 Last Friday, the Nobel Committee awarded the 2017 Nobel Peace Prize to the International Campaign to Abolish Nuclear Weapons (ICAN) “for its work to draw attention to the catastrophic humanitarian consequences of any use of nuclear weapons and for its ground-breaking efforts to achieve a treaty-based prohibition of such weapons.”  https://www.nobelprize.org/nobel_prizes/peace/laureates/2017/  ICAN is a civil society leader for achieving the recent Treaty on the Prohibition of Nuclear Weapons, a legally binding, multilateral treaty prohibiting the development, testing, production, acquisition, possession, stockpiling and the use or threat of use of nuclear weapons.  It provides a clear path to a world without nuclear weapons and is rooted in international humanitarian law, the United Nations Charter, and humanitarian principles.  http://www.undocs.org/en/a/conf.229/2017/L.3/Rev.1

On July 7, 2017, the Treaty was adopted by 122 nations of the United Nations, or nearly two-thirds of the nations of the world.  When the Treaty was open for signature on September 20, 2017, three nations signed and their governments had already ratified it.  In total, 53 nations have signed the treaty, which will enter into force when 50 nations have both signed and ratified it.  http://www.icanw.org/status-of-the-treaty-on-the-prohibition-of-nuclear-weapons/

ICAN is a coalition of 468 non-governmental organizations in 101 countries. By harnessing the power of the people, they have worked to bring an end to the most destructive weapon ever created – the only weapon that poses an existential threat to all humanity.  http://www.icanw.org/ 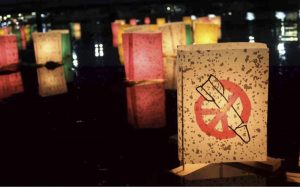 ICAN said, “This prize is a tribute to the tireless efforts of many millions of campaigners and concerned citizens worldwide who, ever since the dawn of the atomic age, have loudly protested nuclear weapons, insisting that they can serve no legitimate purpose and must be forever banished from the face of our earth.”

As the leaders of the United States and North Korea continue to hurl verbal insults about possible nuclear war, there is heighten awareness that the world needs a mechanism to eliminate nuclear weapons.  The Nobel Committee called upon the nuclear-armed states, including the United States and North Korea, to initiate serious negotiations to abolish nuclear weapons.

In their statement, ICAN stated, “This is a time of great global tension, when fiery rhetoric could all too easily lead us, inexorably, to unspeakable horror.  The spectre of nuclear conflict looms large once more.  If ever there were a moment for nations to declare their unequivocal opposition to nuclear weapons, that moment is now.”