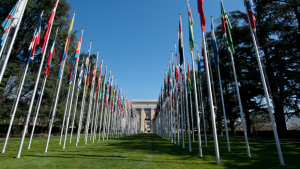 Following the first session of negotiations for a United Nations treaty to prohibit nuclear weapons, the first draft of the treaty was released in Geneva, Switzerland, on May 22nd.  Elayne Whyte Gómez, the Costa Rican ambassador presiding over the negotiations, presented the text to diplomats and members of civil society.  Negotiations resume at UN headquarters in New York City on Thursday, June 15th and continue until Friday, July 7th.   https://www.un.org/disarmament/ptnw/index.html, http://www.icanw.org/campaign-news/draft-un-nuclear-weapon-ban-released/    A Women’s March and Rally to Ban the Bomb will take place there on Saturday, June 17th at noon.  Solidarity events are planned around the world.  https://www.womenbanthebomb.org/ 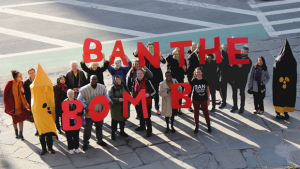 Over 132 countries, or States Parties, participated in the first negotiation session in March.  The United States, and countries hosting its nuclear weapons, boycotted the negotiations.  It is unknown if these countries will participate in the second session.

The draft treaty provides a solid basis for a strong, categorical prohibition of nuclear weapons.  The draft begins with the following language,

“The States Parties to this Convention,

“Deeply concerned about the catastrophic humanitarian consequences that would result from any use of nuclear weapons and the consequent need to make every effort to ensure that nuclear weapons are never used again under any circumstances,

“Cognizant that the catastrophic consequences of nuclear weapons transcend national borders, pose grave implications for human survival, the environment, socioeconomic development, the global economy, food security and for the health of future generations, and of the disproportionate impact of ionizing radiation on maternal health and on girls.” 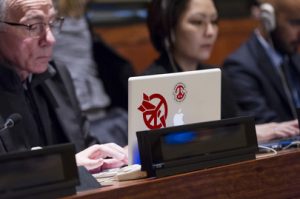 The draft treaty reaffirms the obligations of the Nuclear Non-Proliferation Treaty, the Comprehensive Nuclear-Test-Ban Treaty, and the Nuclear-Weapon-Free Zone treaties that strengthen the nuclear non-proliferation regime.  It prohibits the development, production, manufacture, acquisition, possession or stockpiling of nuclear weapons or other nuclear explosive devices.  Thirty days after the treaty enters into force, it requires States Parties to submit a declaration to the UN Secretary-General about their manufacture, possession or acquisition of nuclear weapons.

Assistance under international humanitarian and human rights law would be available to those affected by the use or testing of nuclear weapons.  Services include medical and psychological care and support, as well as social and economic support.  Assistance would be available for environmental remediation of contaminated areas. http://www.article36.org/nuclear-weapons/va-er-harvard-papers/

Beatrice Fihn, a leader in these efforts and the executive director of the International Campaign to Abolish Nuclear Weapons, said, “We are particularly happy that the text is rooted in humanitarian principles and builds on existing prohibitions of unacceptable weapons, such as the conventions banning biological and chemical weapons, anti-personnel landmines and cluster munitions.”  http://www.icanw.org/

After 40 States Parties ratify, accept, approve or accede to the treaty, it would enter into force.