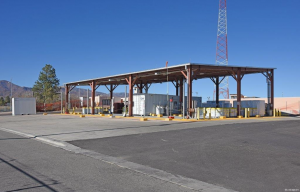 Proposing to increase the generation and storage of hazardous and radioactive waste by 53 percent at the Plutonium Facility at Los Alamos National Laboratory (LANL), the Department of Energy (DOE) submitted a request to the New Mexico Environment Department to modify the hazardous waste permit, naming it “Revision 0” in anticipation of having to resubmit it.  The Plutonium Facility was recently reopened.  It is the only place in the United States for the manufacture of plutonium triggers, or cores, for nuclear weapons.  For a number of years it was closed in order to address security and safeguard issues; long-neglected maintenance; and the increased seismic risk on the Pajarito Plateau, where LANL is located.

DOE wants to store 94,545 gallons of waste in three units at the Plutonium Facility.  One is an outdoor carport on a concrete pad, and the other two are in rooms in the basement.  http://permalink.lanl.gov/object/tr?what=info:lanl-repo/eprr/ESHID-602143-01

Unfortunately, there are a number of errors in the request.  For example, DOE states the classification of the request is a Class 2, which requires a public comment period.  However, it is clear that the classification should be a Class 3 because DOE is asking to increase its storage capacity at the Plutonium Facility by 53 percent.  http://permalink.lanl.gov/object/tr?what=info:lanl-repo/eprr/ESHID-602143-01 p. 13. 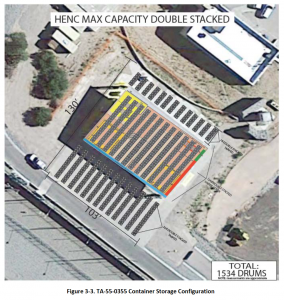 A Class 3 request requires a public comment period, as well as an opportunity to request a public hearing and judicial review of the final decision.  A public hearing is necessary because of the age of the Plutonium Facility, which was built more than 50 years ago; and the on-going public health concerns about the inadequate ventilation system for containing respirable particles of plutonium in emergency situations, among other issues.

The Environment Department has not released a draft permit for public comment.  Nevertheless, CCNS has prepared a sample public comment letter for you to use to the Environment Department to urge them to determine that the proposed permit modification is a Class 3, requiring more opportunities for public participation.  f DOE TA-55 permit mod request 3-17-17

The question DOE has not answered is why does LANL continue to generate hazardous, toxic and radioactive waste associated with manufacture of plutonium triggers for nuclear weapons.  This question is extremely timely given that the United Nations will begin negotiations for a new international treaty prohibiting nuclear weapons.  Two sessions of negotiations will take place in New York.  The first session runs from Monday, March 27th to Friday, March 31st and the second, from June 15th to July 7th.  For more information, visit http://nuclearban.org/