In an effort to save an estimated $40 billion in costs associated with high-level radioactive waste cleanup, the U.S. Department of Energy (DOE) proposes to change the definition of the most dangerous form of radioactive waste.  The estimated cleanup bill for DOE’s major sites, including three in New Mexico, is over $250 billion.  If the definition is changed, there will be more pressure to expand the types of waste allowed to be shipped and 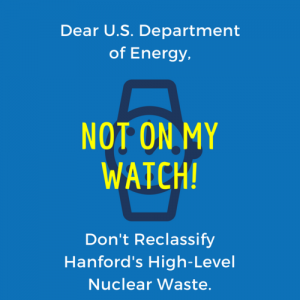 disposed of at the Waste Isolation Pilot Plant (WIPP), located in southeastern New Mexico.  DOE requests your concerns and opinions.  Comments are due to HLWnotice@em.doe.gov by Monday, December 10th.  https://www.federalregister.gov/documents/2018/10/10/2018-22002/request-for-public-comment-on-the-us-department-of-energy-interpretation-of-high-level-radioactive

In September 2017, the Energy Communities Alliance (ECA) released a report entitled, “Waste Disposition:  A New Approach to DOE’s Waste Management Must Be Pursued,” which claims the $40 billion savings.  It does not provide any data to support its claim.  Nevertheless, the ECA presents a number of ideas about what DOE could do to expand the types of waste that could go to WIPP, including changing the definition of high-level radioactive waste.  https://static1.squarespace.com/static/55c4c892e4b0d1ec35bc5efb/t/59ce7384cd39c3b12b97f988/1506702214356/ECA+Waste+Disposition+Report.pdf

The ECA’s mission is to bring “together local government officials to share information, establish policy positions, and promote community interests to address an increasingly complex set of

constituent, environmental, regulatory, and economic development needs.”  http://www.energyca.org/  In April, DOE renewed its five-year grant to ECA.  One of its tasks is to “update and publish special research reports on environmental cleanup issues.”

High-level radioactive waste is generated by reprocessing irradiated fuel rods from nuclear power plants at DOE sites, including at Hanford.  Reprocessing removed plutonium and uranium from the fuel rods, which were then reused in nuclear weapons, and generated millions of gallons of highly radioactive liquids.  The U.S. stopped reprocessing in 1988.  At Hanford, located on the Columbia River, there are 177 tanks storing 56 million gallons of radioactive sludge.  One third of those have leaked, and some are currently leaking.

Changing the definition could result in shipping and disposing of Hanford tank wastes at WIPP site under a new name.

Tom Carpenter, Executive Director of the Seattle-based Hanford Challenge, described his concerns about DOE’s proposal.  He said, “The Trump Administration wants to save billions by renaming this waste, at the cost of leaving this waste in shallow land burial.  Over time, these long-lived radionuclides will be in our food, water and air, causing cancer and mutations for generations.  Of course you can save money by not doing the cleanup.”  https://www.hanfordchallenge.org/