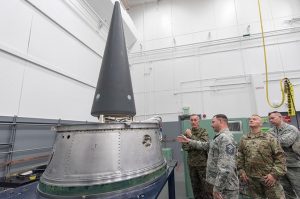 The W-87-1, a new plutonium pit for a proposed nuclear warhead for fighting a full-scale nuclear war, would be fabricated at Los Alamos National Laboratory (LANL).  A plutonium pit is a grapefruit sized radioactive core of a nuclear warhead.  The plutonium pit would fit on a proposed Ground-Based Strategic Deterrent intercontinental ballistic missile.  Many people question the need for a new estimated one billion dollar weapon, which they say is “outdated and unnecessary.”  https://fas.org/issues/icbm-information-project/ (Federation of American Scientists); https://www.internationalpolicy.org/program/Arms-%26-Security-Program (Issue Brief:  Inside the ICBM Lobby:  Special Interests or The National Interest, Center for International Policy’s Arms & Security Program); and https://www.opensecrets.org/news/reports/capitalizing-on-conflict (Capitalizing on conflict:  How defense contractors and foreign nations lobby for arm sales, Center for Responsive Politics). 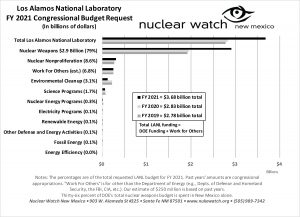 The total congressional budget request for LANL in Fiscal Year 2021 is approximately $3.7 billion.  Approximately 80 percent is for nuclear weapons activities, or $3 billion.

Recently LANL signed two 10-year leases for nearly 96,000 square feet of space in three vacant office buildings in Santa Fe.  LANL plans for 75 employees to be based in one building on the corner of West Alameda and Guadalupe, and 500 more in two buildings on the hill above the intersection of St. Michael’s and Pacheco.  It is calculated that of those employees, 460 will work on nuclear weapons.

City officials and others have claimed that bringing LANL employees to Santa Fe will boost the economy.  But many of them are already in Santa Fe working virtually, such as Thom Mason, who is the LANL Director as well as P

CCNS asks that we look more closely at LANL’s claim to boost the local economy – an extra cup of coffee in the morning, a bagel for lunch, a tank of gasoline, a trip to the bank to deposit the salaries of some of the highest paid employees in New Mexico?  LANL’s taxes are already contributing to Santa Fe’s economy. Such claims depend on redefining what is meant by “economic support” because there is no commercial product, nothing that is a benefit to the community.

CCNS asks why Santa Fe is expressing enthusiasm for LANL’s proposed expansion, when on January 22nd, just seven weeks ago, the international Treaty on the Prohibition of Nuclear Weapons went into force.  It is the first treaty to categorically ban nuclear weapons.  http://disarmament.un.org/treaties/t/tpnw

Like the treaties to ban chemical weapons, biological weapons, and landmines, once they went into force, the weapons manufacturers began to reduce or eliminated production and financial institutions stopped investing in such businesses.  https://thebulletin.org/2021/01/turn-back-the-clock-the-nuclear-ban-treaty-is-entering-into-force/

As a community, questioning LANL plans is essential.

Basia Miller, a CCNS Board member, said, “However the concept of ‘economic support’ is conceived, it cannot outweigh our responsibility to question LANL’s operations, which risk nearly irreversible damage to our lands, health, and lives and the wellbeing of the world.”

And don’t forget to listen to us weekly on your favorite PODCAST platform:

Protest LANL signing a 10-year lease (for the former Descartes building) to establish itself in Santa Fe at the corner of Guadalupe and W. Alameda. JOIN US!  We’ll have banners.  Please bring a sign.

and Sat. March 20th from 2:30 – 5:30 pm MST – Washington-Marshall Islands Nuclear Remembrance Week: We Are Not Alone.  The week of virtual events commemorate Marshallese nuclear legacy, highlighting the Spokane Marshallese community, and bringing together frontline communities from across Washington state and the country.  For more information and to register, go to  https://www.cann-wa.us/our-work