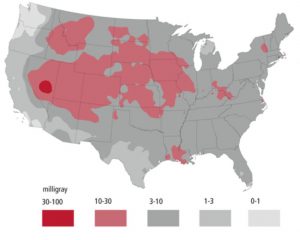 In November 2011, the U.S. Senate designated January 27th as a National Day of Remembrance for the Nevada Test Site Downwinders.  The Senate recognized the harm caused to Americans from radioactive 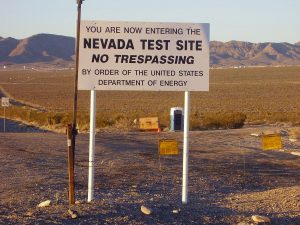 fallout from the aboveground atomic tests in Nevada, which began on January 27, 1951 and ended on July 17, 1962.  At that time, the testing went underground.

The Downwinders of the first aboveground atomic test on July 16, 1945, at the Trinity Site in south central New Mexico, question why they were not included in the Day of Remembrance.  In a recent press release, the Tularosa Basin Downwinders Consortium wrote, “While it is 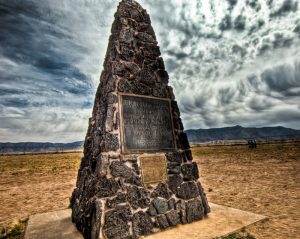 an honorable and just thing to commemorate the Nevada Test Site Downwinders, there are other Downwinders in the United States who have not received this acknowledgement or recognition.  The New Mexico residents who lived downwind of the Trinity Test at the White Sands Missile Range [], were the first people anywhere in the world to be exposed to radiation as a result of the testing of the atomic bomb.”  Seventy-five years later, these Downwinders have yet to be acknowledged.  They have not received the compensation and health care provided to the Nevada Downwinders under the federal Radiation Exposure Compensation Act (RECA), which was passed by Congress in 1990.

The Tularosa Basin Downwinders Consortium continues, “The compensation and health care the Nevada Test Site Downwinders receive is justifiable, but to omit New Mexicans is not.  Historical documents and maps indicate that the entire state of New Mexico also received radiation fallout from the Nevada Test Site; thus, New Mexicans have received a cumulative dose of radiation starting with the Trinity test and continuing through the [above-ground] testing at the Nevada test site. 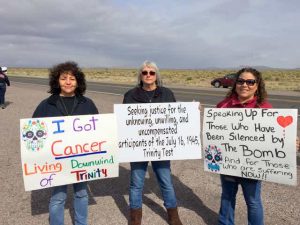 Tina Cordova, a co-founder of the Tularosa Basin Downwinders Consortium, has been advocating for equal compensation for New Mexicans that Nevada Test Site Downwinders began to receive thirty years ago.

Cordova said, “It’s time to recognize the Unsung Patriots who were unknowing, unwilling, uncompensated, innocent participants in the world’s largest science experiment.  People in New Mexico have been suffering in silence ever since the bomb was detonated in July 1945.  It’s time we reveal the rest of the story and people are made aware of the complete legacy of Trinity.”

To learn more about the work of the Tularosa Basin Downwinders Consortium, you are cordially invited to attend their Third Annual Trinity Downwinders Benefit on Sunday, March 15th from 1 to 5 pm at the National Hispanic Cultural Center, in Albuquerque.  There will be music, dancing, door prizes, a silent auction, food and drinks, and lots of fun.  For more information, please visit https://www.trinitydownwinders.com/

or a monthly sustaining donation.  Mail your check to CCNS, P. O.Box 31147, Santa Fe, NM  87594-1147, or use our e-contribution form on the right side of our home page at http://nuclearactive.org/  We need your contribution to continue keeping you informed.  Stay informed with the CCNS Media Network!  Many thanks!

2.     Friday, January 31st at noon- 11th Annual “Witness for the People” in the rotunda of State Capitol in Santa Fe. 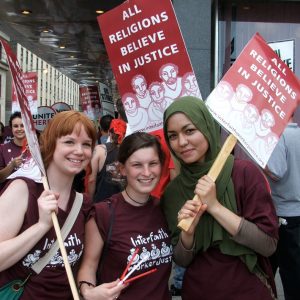 This event is organized by Interfaith Worker Justice- NM as the People of Faith State of the State address and will kick off the 2020 events, conferences, conventions, community organizing involving Trinity, Hiroshima and Nagasaki commemorations.  Music will be provided by Paul and The Tone Daddies.

Dates, times, and place change at the legislature.  Before venturing out, double check the above links to make sure HM21 remains on the agenda, check its placement on the agenda, etc.

5.    February 10th, release of federal budget, including for the Department of Energy (DOE).