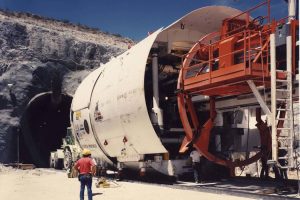 Proposed amendments to the federal Nuclear Waste Policy Act would accelerate two proposals to bring some of the nation’s commercial high-level radioactive waste to New Mexico and West Texas.  Congressman John Shimkus introduced the proposed amendments which would accelerate thousands of shipments of spent fuel rods on trucks, rail, and barges.  The bill, numbered H.R. 3053, would also restart the forced licensing of Yucca Mountain, a Department of Energy (DOE) site located 90 miles north of Las Vegas, Nevada, in a seismic and volcano-ridden area.  It is interesting that Congressman Shimkus represents Illinois, which has the largest number of nuclear power plants in the nation, with 11.  https://www.congress.gov/bill/115th-congress/house-bill/3053 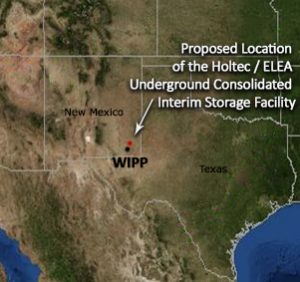 Both privately held corporations, Holtec, International, and Waste Control Specialists, LLC (WCS), have submitted license applications to the Nuclear Regulatory Commission for consolidated interim storage facilities.  The Shimkus bill brings back a term from the past – “monitored retrievable storage,” or MRS, to describe these proposed facilities.  If approved, the bill would allow some, but not all, of the waste currently stored at nuclear power plants around the country, to be shipped to New Mexico or the WCS facility on the Texas-New Mexico border. 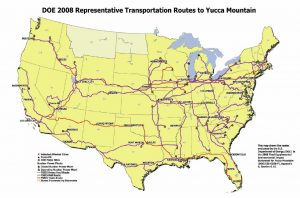 Despite DOE spending millions of taxpayer dollars to explore Yucca Mountain, it is not a viable solution for disposing of high-level radioactive waste.  Even though some people hope Yucca Mountain would open, the transportation threats alone would impact millions living along the truck and rail transportation routes over a period of 50 years.  See State of Nevada’s January 24, 2018 powerpoint presentation, Yucca Mountain Update and Transportation Impacts, to the U.S. Conference of Mayors Winter Meeting, Washington, DC at http://www.state.nv.us/nucwaste/news2018/pdf/nanp180124mayors_conf.pdf 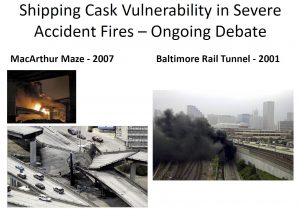 The Shimkus bill continues the policy of the 1987 Nuclear Waste Policy Act to deny Nevada a voice.  The 1987 law designated Yucca Mountain as the only proposed site for DOE to study as a geologic repository.   Another bill, H.R. 456, called the Nuclear Waste Informed Consent Act, would give consent options to Nevada and affected local and tribal governments regarding Yucca Mountain.  https://www.congress.gov/bill/115th-congress/house-bill/456  For Nevada’s analysis, please see, State of Nevada’s Comments on Nuclear Waste Policy Amendments Act of 2017, H.R. 3053,” by Robert Halstead, Nevada Agency for Nuclear Projects, dated January 19, 2018 at https://titus.house.gov/sites/titus.house.gov/files/wysiwyg_uploaded/NV%20NWPAA%20Final%20Comments.pdf

Joni Arends, of CCNS, urged the public to, “Please contact your congress people to urge them to oppose H.R. 3053, the Shimkus bill, and support H.R. 456, the Nuclear Waste Informed Consent Act.”