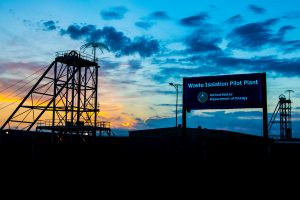 September 20 is the deadline for public comments and request for a hearing on the proposal to expand by about 30 percent the amount of radioactive and hazardous waste allowed at the Waste Isolation Pilot Plant (WIPP). On August 6th, the 73rd anniversary of the U.S. dropping an atomic bomb on Hiroshima, Japan, the New Mexico Environment Department opened the public comment period on the request by the Department of Energy (DOE) and its contractor, Nuclear Waste Partnership (NWP) to change the way the amount of waste has been measured for more than two decades.

The request explains that the effect of the change would reduce the amount of waste emplaced in WIPP as of December 6, 2017 by 930,000 cubic feet, from 3,238,673 cubic feet to 2,307,708 cubic feet. Nevertheless, DOE has not explained where the additional waste would be disposed since there is not space in the existing underground rooms, nor why the change is needed when WIPP is less than 60 percent filled.

An unstated reason for the proposed measurement is that space for more than 1,000,000 cubic feet of waste has been forfeited or lost because of bad DOE management, poor contractor performance, and inefficiencies during the past 19 years of WIPP’s operations. Because of poor planning and other inefficiencies, DOE has shipped and disposed of many empty, or dunnage, containers; has not filled containers to capacity; yet the contractors have been paid fully – and in some cases received bonus. Don Hancock, of Southwest Research and Information Center, explained his concern about expanding WIPP. He said, “For the Environment Department to allow much more waste risks the health and environment for all New Mexicans.”

Public comments can be emailed to ricardo.maestas@state.nm.us by Thursday, September 20th.  Here is a sample letter for your use: WIPP Amt of Waste public comment 8-8-18