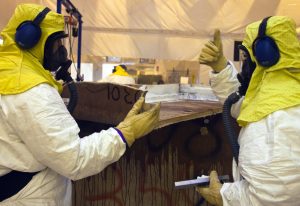 Public comments about the New Mexico Environment Department’s draft 2016 Compliance Order on Consent, or the Cleanup Consent Order, for Los Alamos National Laboratory (LANL) are due to the Environment Department by 5 pm mountain daylight time on Tuesday, May 31st, 2016.  4/1/16 Update (or see chart below)  CCNS and Nuclear Watch New Mexico have teamed up to provide sample public comments you can use.  They are available on the home pages of http://www.nuclearactive.org and http://www.nukewatch.org

Unfortunately, the draft Cleanup Consent Order creates more delays for cleaning up the legacy radioactive and hazardous waste dumped at LANL during the Cold War, which are above drinking water supplies for Pueblo de San Ildefonso and Los Alamos and Santa Fe Counties.  Over the past four and one-half years, the Environment Department granted LANL more than 150 extensions of time under the currently operating 2005 Consent Order.  Now the draft Order allows the Department of Energy (DOE), the owner of LANL, to opt out of cleanup because of “impracticability” or if it costs too much.  The Environment Department proposes to relinquish its regulatory power by allowing DOE to dictate the terms of cleanup, including the levels of pollutants allowed to remain in soil and water.

The draft order substantially changes the focus of cleanup from work at specific sites to a broad “campaign approach.”  NMED:DOE FrameworkAgreement for LANL Jan. 2011 and NMED Summary Framework Agreement 01-5-2012.  That approach failed when it was used to expedite shipping plutonium-contaminated waste from LANL to the Waste Isolation Pilot Plant (WIPP).  One or more of those drums exploded in the WIPP underground causing a more than two-year shutdown.  Over 600 potentially exploding drums are disposed of in the WIPP underground.

The draft Order does not include a final compliance date, which the 2005 Consent Order contains.  The legacy waste cleanup was supposed to be done by December 6, 2015 with the cleanup of the 63-acre Area G dump.  That did not happen.  For that reason and others, Nuclear Watch New Mexico filed a citizens’ suit under the hazardous waste laws against DOE and Los Alamos National Security, LLC (LANS), the management contractor, for missing the 2005 Consent Order cleanup deadlines.  Nuclear Watch is asking for a court order requiring DOE and LANS to come into compliance with the 2005 Consent Order “according to a reasonable but aggressive schedule.”  http://www.nukewatch.org/pressreleases/NW-PR-Lawsuit-5-17-16.pdf

Public comments are due to the Environment Department on Tuesday, May 31th, 2016 by 5 pm mountain daylight time.  Please reference “Draft LANL Consent Order” and submit your comments to: