Storage of High-Level Waste at WCS? Comments Due Monday, March 13th to NRC 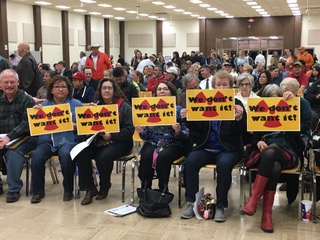 Last spring, Waste Control Specialists (WCS) submitted an application to the Nuclear Regulatory Commission (NRC) for a 40-year license to store up to 40,000 metric tons of commercial irradiated nuclear fuel on de facto permanent parking lot dumps at its site located in West Texas, on the New Mexico border.  Currently, this volume is more than half of the commercial irradiated fuel in the U.S.  The NRC term for a permanent parking lot dump is a “consolidated interim storage facility.”  https://www.federalregister.gov/documents/2017/01/30/2017-01966/waste-control-specialists-llcs-consolidated-interim-spent-fuel-storage-facility-project

The 14,900-acre dumpsite is located five miles east of Eunice, New Mexico and 32 miles west of Andrews, Texas on Highway 176 West.  It is licensed to dispose of hazardous and toxic waste and to process and store low-level radioactive waste.  http://www.wcstexas.com/

WCS was licensed while Rick Perry was Governor of Texas, despite the lack of protection of the four aquifers below the site – the Ogallala, the Dockum, the Pecos Valley, and the Edwards-Trinity Plateau, among other things.  The Simmons family, owner of WCS, is a large political contributor to Perry.  The patriarch, Harold Simmons, contributed $620,000 to Perry’s campaigns.  http://www.counterpunch.org/2017/01/09/radioactive-waste-is-good-for-you-or-how-i-learned-to-stop-worrying-and-love-rick-perry-as-energy-secretary/

Next week, it is expected the U.S. Senate will confirm Rick Perry as President Trump’s Department of Energy (DOE) Secretary.  https://www.energy.senate.gov/public/index.cfm/2017/1/nomination-hearing-of-the-honorable-rick-perry-for-secretary-of-energy  At his confirmation hearing, Perry re-affirmed his support for surface storage facilities at WCS, even though current federal law prohibits DOE from owning or paying for storage and transportation at such privately owned sites.  WCS’s license application states that it will only operate if DOE does own the waste and pays the costs. 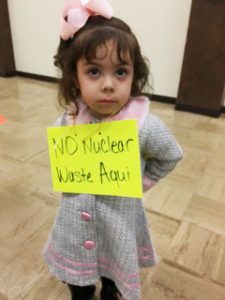 NRC will prepare an environmental impact statement to examine surface and ground water, transportation, geology, soil, air, socioeconomics, historic and cultural resources and threatened and endangered species, among other issues.  You are invited to provide comments to NRC about what issues should be addressed in the statement, with comments due on Monday, March 13th.  CCNS posted a sample public comment letter for you to use. NRC_WCS_Scoping_Comments022317  *Please note* – “The NRC cautions you not to include identifying or contact information that you do not want to be publicly disclosed in your comment submission.  The NRC posts all comment submissions at http://www.regulations.gov as well as entering the comment submissions in ADAMS [the NRC’s Agencywide Documents Access and Management System].”  82 Fed. Reg. 8771, January 30, 2017.  Please modify as you wish, but please be sure to submit your comments to James.Park@nrc.gov before the Monday, March 13, 2017 deadline.  THANK YOU!

Just 40 miles away in New Mexico, the private nuclear company, Holtec, is expected to submit its application in late March for a de facto permanent parking lot dump for 100,000 metric tons of irradiated fuel.   http://www.currentargus.com/story/news/local/2016/02/05/eddy-lea-alliance-moves-nuclear-storage-site/79893524/

Thus, if both sites are approved, all of the nation’s existing irradiated fuel and all that would be generated in the next 30 years could come to those two sites.