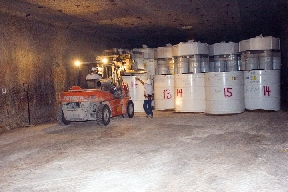 On November 10, 2016, the Department of Energy (DOE) requested a temporary authorization from the New Mexico Environment Department to install eight closure bulkheads in the Waste Isolation Pilot Plant (WIPP) underground; discontinue inspections of existing closure apparatus and bulkheads; and terminate monitoring of hydrogen, methane and volatile organic compounds in the waste filled rooms.  http://www.wipp.energy.gov/rcradox/16-3326_Temporary_Authorization_Request.pdf  On the same day, DOE submitted a 757-page revised permit modification request to the Environment Department for the same changes.  http://www.wipp.energy.gov/library/Information_Repository_A/Class_3_Permit_Modifications/Response_TID_Revised_Class_3_PMR_WIPP_Panel_Closure_Plan.pdf

DOE believes it can install the proposed bulkheads under a 180-day temporary authorization before completion of the required public comment and public hearing on the modification request. Nevertheless, DOE acknowledges that it may need to request another 180-day extension of time.  http://www.wipp.energy.gov/rcradox/16-3326_Temporary_Authorization_Request.pdf

The Environment Department has said on previous occasions that a temporary authorization requires showing that the activities are “essential” and the need is “immediate.”  Otherwise, normal public comment procedures should be followed.

The Environment Department’s hazardous waste permit for WIPP requires that any request for a temporary authorization must be posted on the WIPP website, as well as mailing a notice that the document is posted to interested people.  But WIPP did not post their request as required.

In other WIPP news, the Environment Department recently extended the public comment period for the proposed 65,280 cubic foot waste container storage unit on the surface at WIPP until February 3rd, 2017.  Sample public comments are available at http://nuclearactive.org/wp-content/uploads/2016/10/WIPP_Surface_Storage_Comment_102016.pdf

At the same time, while DOE is planning to close some of the contaminated underground and build above-ground storage, it is working to re-start waste emplacement following the February 2014 vehicle fire and explosion.

Hancock said, “WIPP officials knowingly violated permit requirements regarding posting the temporary authorization request.  WIPP has not adequately justified the temporary authorization, so the request should be denied.  WIPP needs to focus on protecting workers and the public from a contaminated mine that has inadequate ventilation and collapsing ceilings.  It should not continue to propose WIPP expansions and premature re-opening.”