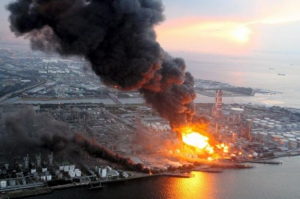 For the millions of people who were evacuated from their communities located downwind of the Chernobyl nuclear power plant Reactor Number 4 that exploded and released vast quantities of radiation and other toxins 30 years ago, they have not returned home to live.  As a result, the Russian government built new communities, but for many, it is not home.

Further, more than 800,000 emergency responders, firefighters, soldiers, engineers, farmers, miners and volunteers, called “liquidators,” were exposed to high levels of radiation as they worked to evacuate the people in the estimated 3,600 to 4,500 buses, trucks and military vehicles needed for the task.  For years, the liquidators worked at the impossible task to cleanup the area, which is the size of Rhode Island.

Most of the liquidators were 18 to 22 years of age from Belarus, Russia and Ukraine, the areas hardest hit by the release of radiation and other harmful toxins.  Twenty percent of them died in the first 20 years following the 1986 catastrophe.

It is these populations that have suffered the worst health effects, including heart disease; thyroid and other radiation-induced cancers, genetic damage and birth defects, fully developed eye cataracts in young people, psychological problems and damaged immune systems. In this case, a damaged immune system can open the body to non-radiation related diseases, colds and flus, and chronic infections.  See:  Cathy Sullivan’s Update stories about “One Nuclear Reactor Can Pollute Half the Globe” at http://www.nuclearactive.org/news/102910.html  and http://www.nuclearactive.org/news/110510.html  The millions exposed to high levels of radiation have received little support and medical care from the government.

Sergey Krasilnikov, 65, was a liquidator and a foreman in the reconstruction of the power plant.  He told his story to USA Today about his sacrifice during the disaster to protect family living in Kiev, the capital of Ukraine with a population of over 2.5 million people.  http://www.usatoday.com/pages/interactives/chernobyl/

Krasilnikov explained, “Then in 1994, I got sick.  After my medical assessment they said my stroke and paralysis were a direct result of my work as a liquidator.

“Yet it still took a long time before I got any disability assistance from the government, and we lived hand-to-mouth and had to sell a lot of things.  I now get about [$200] a month.  I pay [about $136] each month for treatment.

“Had I known with what indifference and scorn the state would treat me now, I may not have agreed to be a liquidator.  Nevertheless, I had family in Kiev.  I wasn’t saving state bureaucrats, I was protecting the people of Ukraine.”

For the 30th anniversary of the Chernobyl disaster, a number of publications, including USA Today http://www.usatoday.com/pages/interactives/chernobyl/, The Guardian http://www.theguardian.com/environment/chernobyl-nuclear-disaster, and the website enformable http://enformable.com/2015/09/experiencing-the-chernobyl-nuclear-power-plant-nearly-30-years-later/ have extensive stories about the evacuees, liquidators and those who stayed, along with photo essays and videos.

On Tuesday, May 3rd, Beyond Nuclear and the Goethe-Institut, DC will co-host an afternoon and evening program that will mark the 30th anniversary of Chernobyl and the 5th anniversary of Fukushima.  The program is called Lessons from Fukushima and Chernobyl:  The Risks of Normalizing Radiation.  Leading international experts and compelling short films will headline the special event.  It will be held at the Goethe-Institut, DC, at 1990 K Street, NW (event entrance on 20th Street) from 2 to 5 pm and 7:30 to 9 pm.  All events are free and open to the public.  No registration is required.  For more information and to view the full program, visit  http://www.beyondnuclear.org/chernobyl30-fukushima5/