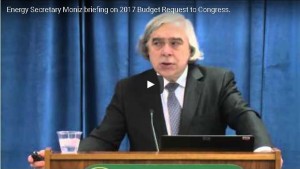 U.S. Department of Energy (DOE) Secretary Ernest Moniz recently announced that the Waste Isolation Pilot Plant (WIPP) would again dispose of plutonium-contaminated nuclear weapons waste in the deep geologic dump by the end of 2016. WIPP has been shut down for two years following a truck fire and radiation release that contaminated 22 workers and the underground facility. Moniz made his remarks on February 9th when the Obama Administration released its proposed fiscal year 2017 budget, which includes $266 million for WIPP. At the time of the February 2014 events, WIPP’s annual budget was $216 million. http://energy.gov/articles/president-s-2017-budget-proposal-doe-supports-energy-innovation-national-security-nuclear and http://www.energy.gov/sites/prod/files/2016/02/f29/FY2017BudgetVolume5_0.pdf, pp. 77 to 115.

The WIPP Recovery Plan and the 2016 budget request stated that WIPP would reopen in March 2016. That date proved unrealistic even for the proposed limited operations of about 200 shipments per year. At the peak rate in 2006, there were 1,128 shipments. Among the reasons that shipments would be limited is that the airflow capacity in the underground to protect workers and to operate equipment is one-seventh of that when the 2014 events occurred. Airflow is reduced because contamination in the underground requires filtering the air before it is released into the environment.

The “interim” ventilation system would double the amount of filtered air and was to be operational in April 2015, but is about a year late because the system had manufacturing flaws and was damaged during shipment.

Second, the “supplemental” ventilation system would increase airflow in the “clean” part of the facility and not filter the air. The supplemental system was to be operational in December 2015, but is now delayed until March 2017.

Third, the “permanent” ventilation system would require a new 2,150 feet deep exhaust shaft and two underground tunnels. The design is to be done by January 2018 and might be operational by 2021. There is no total estimated cost for the permanent system. The contract for Nuclear Waste Partnership, a limited liability corporation that operates WIPP, has increased by more than $300 million because of the February 2014 events.

In his February 9th statement, Secretary Moniz also announced a new mission for WIPP – the disposal of up to 13 metric tons of surplus weapons-grade plutonium, currently stored at the Savannah River Site in South Carolina. The plan is to start shipping that waste to WIPP in 2023. http://energy.gov/articles/president-s-2017-budget-proposal-doe-supports-energy-innovation-national-security-nuclear

New Mexico Senators Tom Udall and Martin Heinrich both expressed concerns about the surplus plutonium decision. http://www.tomudall.senate.gov/?p=press_release&id=2235 Senator Heinrich said, “Restoring WIPP to safe operation should be the priority before there is any further discussion of expanding WIPP’s mission to accept additional types of waste.” http://www.heinrich.senate.gov/newsroom/statements-and-speeches/heinrich-statement-on-president-obamas-2016-budget-proposal