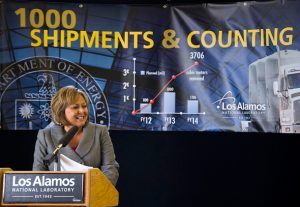 The “new” Consent Order for Los Alamos National Laboratory (LANL) substantially changes the focus of cleanup from work at specific sites to a broad “campaign approach.”  The campaign approach failed dramatically when it was used to accelerate shipping plutonium-contaminated waste from LANL to the Waste Isolation Pilot Plant (WIPP), as directed by New Mexico Governor Susana Martinez and her Environment Department.  In February 2014, one or more of the LANL drums shipped to WIPP under the accelerated campaign approach exploded in the WIPP underground, contaminating 22 workers and shutting down the facility.  Over 600 potentially exploding drums are disposed of in the WIPP underground, with no plans for removal.

On Friday, June 24th, the New Mexico Environment Department signed the “new” Compliance Order on Consent, or the 2016 Consent Order, with the Department of Energy (DOE) for cleanup at LANL.  https://www.env.nm.gov/wp-content/uploads/2016/01/160624PR-ConsentOrderFinalized.pdf

The 2016 Consent Order expands the use of the campaign approach for accelerated cleanup.  Examples include the chromium plume in the regional drinking water aquifer; areas contaminated with high explosives and other hazardous wastes; and Technical Area-49 where plutonium devices were tested underground in the early 1960s.  The evidence is clear that when LANL accelerates cleanup, disaster follows.

Further, the Environment Department and DOE agreed amongst themselves to remove all public participation for any modification of the 2016 Consent Order, including the opportunity to request a public hearing, as required by the applicable hazardous waste laws and regulations.  https://www.env.nm.gov/wp-content/uploads/2015/12/LANL_Consent_Order_FINAL.pdf

40 CFR (Code of Federal Regulations) Section 270.42 addresses permit modifications and provides many opportunities for public participation, including public notice, review and comment; administrative hearings, where the public may cross-examine witnesses; and judicial appeals.  It also provides categories for modifications.  Under the regulation, modification of the Consent Order would be considered a major Class 3 modification, requiring notice, review and public comment; opportunity for a public hearing; and judicial appeal.

Public comments about the draft 2016 Consent Order (including CCNS and Robert H. Gilkeson, Independent Registered Geologist) are available at https://www.env.nm.gov/HWB/lanlperm.html#Comments2016DraftCO

The new Consent Order does not include a final compliance date, which superceded the 2005 Consent Order that did contain a final completion date.  Under the “old” Consent Order, all legacy waste cleanup was supposed to be done by December 6, 2015 with the cleanup of the 63-acre Area G dump.  That did not happen.  For that reason and others, Nuclear Watch New Mexico filed a citizens’ suit under the hazardous waste laws against DOE and Los Alamos National Security, LLC (LANS), the management contractor, for missing the 2005 Consent Order cleanup deadlines.  http://nukewatch.org/importantdocs/resources/NukeWatch-Complaint-Filed-20160512.pdf; May 5, 2016 second notice of intent to sue (provides a good summary of the complaint) at http://nukewatch.org/importantdocs/resources/NukeWatch-2nd-NOI-DOE-LANS-5-5-16.pdf; and January 20, 2016 first notice of intent to sue at http://nukewatch.org/importantdocs/resources/NukeWatch-NM-NOI-to-DOE-and-LANS-20160120.pdf

Under the 2005 Consent Order, the violations could result in approximately $300 million in potential penalties for missing the deadlines.  Nuclear Watch is asking for a court order requiring DOE and LANS to come into compliance with the 2005 Consent Order “according to a reasonable but aggressive schedule.”

Recently, the Environment Department filed a motion with the court to intervene in the case on the side of DOE and LANS.  As Nuclear Watch wrote in its press release, the request to the court raises “the question of whose side the Environment Department is on, the environment or the polluter[,] in this case a for-profit nuclear weapons lab[.]”  http://www.nukewatch.org/watchblog/?p=2289