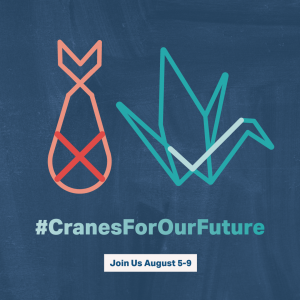 The war in Ukraine and Russia’s repeated nuclear threats are a painful reminder that nuclear weapons pose a catastrophic risk to humanity every day.

But this weekend, on the 77th anniversary of the atomic bombings of Hiroshima and Nagasaki, we all have the opportunity to share a powerful message that a more peaceful future is possible—one where the world is no longer vulnerable to the threat of nuclear destruction.

Between August 5 and 9, we invite you to join people around the world: Fold an origami crane and share it on your social media with the hashtag #CranesForOurFuture.

To learn how, go to: https://www.cranesforourfuture.org/fold

Last August, the #CranesForOurFuture campaign inspired thousands of people to mark the Hiroshima and Nagasaki anniversaries, reaching millions worldwide. This August, diplomats from around the world will gather at the United Nations to make progress on reducing nuclear risks. It is more important than ever to show these leaders that we are united around a shared hope for a more joyful, peaceful world.

That’s why, in your #CranesForOurFuture post, we also ask you to share a short message about what a future without nuclear weapons means to you. Is it a more peaceful world for your children or grandchildren? A global system built on mutual respect and not fear and terror? Does that world focus on funding basic needs instead of weapons of war?

The origami crane has become a symbol of peace around the world thanks to Sadako Sasaki, a victim of the Hiroshima atomic bombing who folded more than a thousand paper cranes and was memorialized in the Children’s Monument at the Hiroshima Peace Park. Together, we can honor Sadako and all those who perished 77 years ago in the bombings in Hiroshima and Nagasaki and work for a future where no one faces the threat of a nuclear weapon again.

The power to craft a safer future is truly in our hands. Your crane, taken along with others around the world, will spread our shared vision for a more peaceful world and help make nuclear weapons a relic of the past.

Thanks for everything you do!