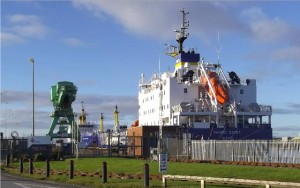 On February 6, 2016, two armed U.K.-flagged transport vessels on a secret mission to retrieve weapons-grade plutonium in Japan and transport it to the U.S. Department of Energy’s (DOE’s) Savannah River Site in South Carolina were located in the Panama Canal. According to the public interest group, Savannah River Site Watch, the spotting of the specialized nuclear transport ships confirms the route to Japan and their mission to transport 331 kilograms, or 730 pounds, of plutonium to the U.S. as part of international nuclear non-proliferation efforts. http://www.srswatch.org/uploads/2/7/5/8/27584045/srsw_news_on_plutonim_ships_in_canal_feb_6_2016.pdf and
http://www.srswatch.org/uploads/2/7/5/8/27584045/srs_watch_news_japan_plutonium_december_21_2015.pdf

Savannah River Site Watch, or SRS Watch, rejects amassing French and British plutonium in South Carolina because those countries have their own storage facilities.

Furthermore, South Carolina Governor Nikki Haley has called on DOE to remove one metric ton of plutonium from SRS by January 1, 2016, which has not been done.

Tom Clements, director of SRS Watch, said, “We strongly object to foreign-origin plutonium coming into South Carolina when DOE’s program to manage surplus weapons plutonium is in shambles. As DOE’s plutonium fuel project has totally failed, it’s time for DOE to live up to its commitment to remove plutonium from South Carolina and not bring in more with no viable disposition path out of the state.”

In 2010, DOE prepared an environmental assessment for the import of 100 kilograms of plutonium to SRS, which was never released for public review and comment. A December 2015 DOE environmental assessment revealed that up to 900 kilograms, or 1984 pounds, of “gap” plutonium should be reviewed for import to SRS. Gap plutonium is plutonium that does not have a return country, such as Sweden. http://www.srswatch.org/uploads/2/7/5/8/27584045/srs_watch_release_draft_ea_gap_plutonium_dec_29_2015.pdf

The ships, the Pacific Egret and Pacific Heron, that were recently located in the Panama Canal are based in Cumbria, UK and are operated by the private company, Pacific Nuclear Transport Limited, which brought plutonium to SRS before via Charleston, South Carolina, including Swedish plutonium in 2012, and Italian and Belgian plutonium in 2014.

For more information about the amount of plutonium already stored at SRS and the lack of a viable disposition plan, please visit the Savannah River Site Watch website at http://www.srswatch.org.