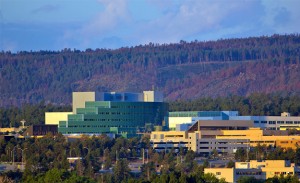 Given the recent Department of Energy (DOE) announcement that it will soon put the management contract out for bid at Los Alamos National Laboratory (LANL), Glenn Walp, Steve Doran, and Chuck Montaño renewed their request for U.S. Attorney Damon Martinez to investigate the alleged suicide of a former LANL deputy director and conclude the procurement fraud investigations begun in 2002 by Walp and Doran.

Scandals have been an integral part of LANL’s operations. At the end of the 1990’s, LANL was plagued with scandals, including false accusations that LANL scientist Wen Ho Lee gave nuclear weapons designs to China; missing hard drives containing nuclear weapons designs, which were later found behind a copy machine in a room that had been searched twice; and failing to prevent nuclear materials from being stolen during a mock terrorist attack. These and other scandals, along with the possibility of DOE competing the management contract, pushed LANL in early 2002 to hire former law enforcement officers, Walp and Doran, to investigate fraud and potential security breaches. Once Upon a Time in Los Alamos, Project on Government Oversight (POGO), January 12, 2016 at http://www.pogo.org/blog/2016/02/whistleblowers-call-for-inquiry-into-lanl-employee-death.html

Walp was the Commissioner of the Pennsylvania State Police. See Glenn Walp’s book, Implosion at Los Alamos, at http://www.implosionatlosalamos.com/ Doran was the police chief of Idaho City, Idaho.

Walp and Doran found many instances of corruption, including fraudulent purchases of hunting, camping and ranching gear and equipment that were stored in a remote Cold War bunker. They were then fired by LANL.

On January 24, 2003, former LANL Deputy Director for Operations, Richard Burick, was found dead in the parking lot of the Pajarito Mountain Ski Area, along with a revolver found about a yard past his feet. Within hours, the Los Alamos Police Department determined it was a suicide. Many questions remain unanswered, such as why an unspent round had been ejected from the revolver.

Soon it was discovered that Burick had owned a ranch in southwest New Mexico where he planned to ranch and provide hunting services. As the Walp and Doran investigation heated up, Burick sold the ranch for $1 and other valuable consideration.

Many unanswered questions linger about possible connections between the fraudulent purchases and the alleged suicide.

Chuck Montaño joined Walp and Doran. Montaño is a multi-credentialed auditor and investigator who was employed at LANL for 32 years. After reporting accounting malpractice and abuses Montaño had witnessed for years, he became a federally protected whistleblower. See Chuck Montaño’s recent book, Los Alamos: Secret Colony, Hidden Truths – A Whistleblower’s Diary, at http://losalamosdiary.com

The three wrote to U.S. Attorney Martinez, stating, “It is imperative that decision makers know the full extent of what transpired in order to know how best to proceed with the award of the new contract. Without a deeper understanding and accountability before the award is made, it is possible that the LANL management contract will end up in the hands of those largely responsible for the cover-up of past mismanagement at the Los Alamos Lab, or even worse, the possible obstruction of justice that occurred.” http://nukewatch.org/importantdocs/resources/Letter-NM-US-Attorney-LANL-fraud.pdf