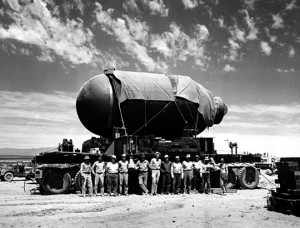 After reading a series of blog posts by the three-member Los Alamos Historical Museum delegation about their recent trip to Japan to gain perspective about the August 1945 U.S. atomic bombings, Dr. Maureen Merritt wrote in an opinion editorial that her “first reaction was anger. “  She is angry that the Museum team could “spend tens of thousands of dollars to travel to Japan to find out how the Japanese feel about us bombing Hiroshima and Nagasaki 71 years ago, but can’t even mention the 1945 atomic blast at the Trinity site, or how our own New Mexico ‘downwinders’ feel about that fateful event.”

In the works for two years, the trip will result in an exhibit opening in December.  The National Trust for Historic Preservation gave the Museum a $10,000 grant.  The New Mexico Japanese Citizens League supports the project.  Judith Stauber, director of the Museum, said the exhibit would also explore the World War II internment camps established in New Mexico for Japanese Americans and German and Italian prisoners of war.

Nevertheless, the exhibit will not explore what happened to the victims of the first U.S. atomic bombing on July 16, 1945 at the Trinity Test Site in south central New Mexico.  The morbidity and mortality statistics for many of the counties surrounding Trinity are higher than those in the rest of the U.S.  Dr. Merritt writes that nuclear bomb survivors “living in and around the Tularosa basin feel much the same way the Japanese survivors do.”

Through Dr. Merritt’s editorial, the Tularosa Basin Downwinders Consortium invites the Los Alamos Historical Museum to learn about the first atomic blast by visiting with the Trinity downwinders, their children, grandchildren and great-grandchildren.  They will learn of the downwinders’ tremendous suffering from being bombed by their own country by an atomic weapon created at Los Alamos National Laboratory.

Merritt continues, “New Mexico‘s downwinders’ have been written out of the history books, including Los Alamos National Laboratory’s museums and carefully crafted stories of the Manhattan Project.  As a physician advocate and active member of Physicians for Social Responsibility [and a core member of the Tularosa Basin Downwinders Consortium], I am angry because a grievous wrong has yet to be righted.  The people of New Mexico, the United States, and indeed the world including Japan, deserve the full truth.  [The Tularosa Basin Downwinders Consortium] demand[s] equal time.  And that time is now.  71 years later.”