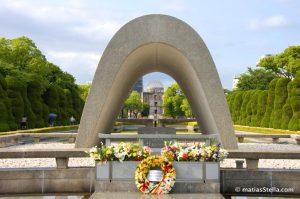 In a historic trip, President Obama will visit the Hiroshima Peace Memorial Park on Friday, May 27th following the G-7 summit.  For the first visit by a U.S. siting president, Obama will visit the park located in the center of Hiroshima, which is dedicated to those harmed by the 1945 U.S. atomic bombing.  The President will  “offer a forward-looking vision focused on our shared future.”

Many non-governmental organizations, military and technical experts, and the public are urging Obama to announce his vision with four definitive steps towards “a world without nuclear weapons.”  They suggest Obama call for a United Nations resolution for a global moratorium on nuclear testing; reduce the U.S. nuclear arsenal from 1,550, as required by the New START Treaty with Russia, to about 1,000; and retire all 400 U.S. intercontinental ballistic missiles, or ICBMs.  Further, they suggest taking all ICBMs off alert status and cancelation of the $30 billion nuclear cruise missile and the $60 billion ICBM replacement.

As Ben Rhodes, a deputy national security advisor, wrote, “The President and his team will make this visit knowing that the open recognition of history is essential to understanding our shared past, the forces that shape the world we live in today, and the future that we seek for our children and grandchildren.”  https://medium.com/@rhodes44/the-first-sitting-u-s-president-to-visit-hiroshima-1992461baf4c#.qk9bh42ua

“The open recognition of history is essential to understanding our shared past” is also one of the goals of the Tularosa Basin Downwinders Consortium.  For that reason and others, the Consortium invited President Obama to visit Tularosa, New Mexico and attend the Saturday, July 16th commemoration events of the first atomic bomb explosion on July 16th, 1945 at the Trinity Test Site.  July 16, 2016 event flyer and ACTION ALERT TBDC Jan 2016

The events include the Seventh Annual Candlelight Vigil that memorializes those who have lost their lives to cancer and honors those who are living with or who have survived cancer.  It will begin at 8 pm at the Tularosa Little League Field in West Tularosa.  Luminarias will be available beginning at 7 pm.

Tina Cordova, a co-founder of the Consortium, said, “By all means President Obama should visit Japan later this month and acknowledge the catastrophic results of the use of an atomic bomb.  However, he should also visit the American citizens who were the first victims of an atomic bomb as a result of the Trinity test.  We’ve been waiting 71 years for acknowledgement and help with the horrible health effects we’ve suffered ever since the bomb was tested at Trinity.  It’s high time for our government to right the wrong that was done to us.”