Comments due to NMED about WCS Discharge Permit on Tuesday, May 2nd 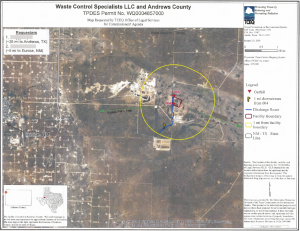 After nearly four years of start and stop negotiations with Waste Control Specialists (WCS), on March 3rd, the New Mexico Environment Department released a draft permit for the discharges of 170,500,000 gallons per day from the 14,900-acre radioactive and hazardous waste storage and disposal facility located in Texas on the Texas-New Mexico border, five miles east of Eunice, New Mexico.  The main outfall is located approximately 100 yards from the New Mexico state line.  CCNS has prepared a sample public comment letter you can use to submit comments to the Environment Department by 11:59 pm MST on Tuesday, May 2nd.  WCSSamplePublicComments042717

An immediate concern is the discharge volume of approximately 532-acre feet of industrial waste water and storm water that would flow from the dump every day to unnamed ditches in Texas and New Mexico, to the Monument Draw that flows in New Mexico and Texas, and then to the Rio Grande.  The permit contains contingencies for monsoons and flooding; even so, it is a huge volume of water.  NMEDWCSDRAFTGROUNDWATERPERMIT0302017

Texas also regulates the discharge.  http://www.wcstexas.com/pdfs/licenses/(1)%20Texas%20Pollutant%20Discharge%20Elimination%20System%20Permit-Byproduct%20Facility.pdf and http://www15.tceq.texas.gov/crpub/index.cfm?fuseaction=iwr.viewdocument&doc_name=Permit%2004038%2Epdfpdf&doc_id=947295212016237&format_cd=pdf  At one time it required WCS to meet New Mexico water quality standards.  For the past four years, only Texas standards apply.  In 2012, after WCS exceeded the discharge standards, WCS asked the Texas Commission on Environmental Quality to remove the New Mexico standards from the permit because WCS was working with the Environment Department to obtain a discharge permit.

On February 1st, before the Environment Department released the draft permit for public comment, WCS sent a letter asking to withdraw its application.  The Environment Department said no, “particularly given WCS’s actions in securing the removal of New Mexico effluent standards from the applicable Texas surface water permit based on representations to the Texas Commission on Environmental Quality that WCS would obtain a groundwater discharge permit from New Mexico.”  See Exhibit B [NMED February 9, 2017 Letter to WCS] at https://www.env.nm.gov/wp-content/uploads/2017/03/Waste-Control-Specialists-LLCs-Petition-for-Review-and-Notice-of-Appeal-of-the-Ground-Water-Quality-Bureau-of-the.pdf

In the meantime, WCS is in court this week to oppose the Department of Justice antitrust lawsuit.  Last week, WCS asked the Nuclear Regulatory Commission to temporarily suspend review of its application for a 40-year license to build and operate a consolidated interim storage facility for 44,000 tons of plutonium fuel from nuclear power plants.  WCS Asks NRC to Pause License Application Review for High-Level Irradiated Waste Storage

Joni Arends, of CCNS, said, “Is this the type of privately-held corporation we want to be releasing its waste and storm waters into New Mexico?”