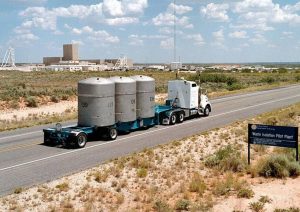 The Department of Energy (DOE) wants to bring a new kind of plutonium-contaminated, or transuranic, waste to the Waste Isolation Pilot Plant (WIPP).  DOE would dilute up to 48.2 metric tons of surplus plutonium and dispose it at WIPP.  This waste was not included previously in the WIPP waste inventory, and there could be up to 160,000 55-gallon drums destined for WIPP. 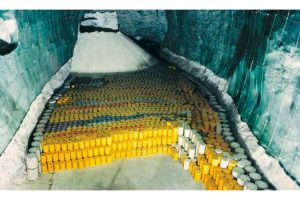 For years, the DOE made many promises to the People of New Mexico, thus creating a “social contract.”  Some provisions of the social contract were that WIPP would accept transuranic waste only from past nuclear weapons manufacturing.  The maximum volume of such waste would not exceed 6.2 million cubic feet in the deep underground disposal facility.  WIPP would operate for 25 years and then begin closure, which could take 10 years.  Since WIPP opened in 1999, it should end waste disposal in 2024.

Nevertheless, DOE wants to expand the types of waste destined to WIPP, including the diluted surplus plutonium, and extend disposal operations until after 2080.  Much of this diluted waste is part of an international agreement with Russia to downblend plutonium for use in nuclear power plants.

The National Academies of Science, in its new report released on April 30th, entitled Review of the Department of Energy’s Plans for Disposal of Surplus Plutonium in the Waste Isolation Pilot Plant, raised concerns about violating the social contract as well as other obstacles to bringing so much diluted surplus plutonium waste to WIPP.  https://www.nap.edu/download/25593, pp. 8 – 9. 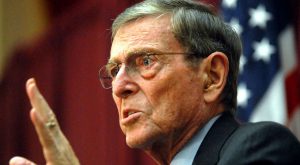 The report noted that U.S. Senator Pete V. Domenici of New Mexico, a proponent of WIPP, objected to diluted surplus plutonium at WIPP.  In 2002, the Senator wrote to then DOE Secretary Spencer Abraham:  “I want to ensure that high level or weapons material wastes can never be simply diluted in order to comply with criteria for WIPP disposal ….  In fact, dilution of weapons materials, simply in order to facilitate disposal, raises serious questions about our adherence to the same international controls on weapon-related materials that we expect other nations to follow.”  https://www.nap.edu/download/25593, pp. 8, 95.

In the waning days of the Martinez Administration, the New Mexico Environment Department approved DOE’s request to change the way it calculated the volume of waste, thereby increasing WIPP’s capacity by 30 percent.

U.S. Senator Tom Udall recently expressed his concern about that waste recalculation.  Senator Udall was previously the New Mexico Attorney General and he said the volume limits “were a major reason New Mexico agreed to this mission in the first place ….” 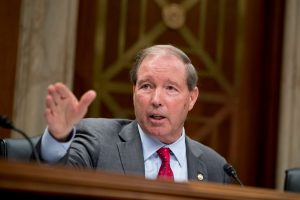 He continued, “I am encouraging the new administration [of Governor Michelle Lujan Grisham] to take a hard look at this action, and hopeful that it will pause and reconsider this last-minute change that has major ramifications for our state.”  https://www.nap.edu/download/25593, p 95.

The National Academies of Science made findings in their report.  We quote Finding 5-4 to provide more information about the social contract between the People of New Mexico and DOE and the magnitude of the changes DOE proposes:

“FINDING 5-4: By virtually any measure, the proposal to dilute 48.2 MT of surplus plutonium and dispose at the Waste Isolation Pilot Plant (WIPP) represents a substantial technical and “social contract” change for WIPP and the State of New Mexico.

“Several other converging factors occurring in the next 5 to 8 years could further exacerbate the ability of the regulatory institutions (EPA [Environmental Protection Agency], NMED [New Mexico Environment Department]), and the State of New Mexico to consider the significance of the dilute and dispose program in its entirety. These other factors include:

“• The recent new shaft and access drift being developed are expected to lead to a request for new disposal panels to accommodate the space lost in the abandoned south end, the additional volumes of waste that are enabled by the LWA [Land Withdrawal Act] volume of record accounting change, and the SPD-TRU [surplus plutonium disposition – transuranic] volumes (6 MT [metric tons] already in the WIPP-bound inventory). It is unclear where or what new room/panel configurations might be proposed, but they will introduce new asymmetries in the repository modeling and have to be reflected in the future PAs [performance assessments] of long-term performance, EPA’s compliance recertification reviews, NMED review and approval, etc.

The currently available physical capacity in WIPP is limited by the number of panels in its original design. A Government Accountability Office report (GAO, 2017) concluded that WIPP would reach current available physical capacity by 2026 and that at least two additional panels would be needed to accommodate future TRU waste. The existing panels in the WIPP underground are nearly full, and so new panels will have to be designed and mined to accommodate future wastes.

A new mathematical modeling tool, PFLOTRAN, is under development at Sandia National Laboratories that might be integrated into a suite of other modeling tools used to assess WIPP’s regulatory performance. PFLOTRAN is needed because it is expected that there will be an asymmetry introduced when new panels are designed and located. PFLOTRAN would replace an earlier code, BRAGFLO, which relies on a symmetrical geometry of the underground.

DOE-EM [Department of Energy – Environmental Management] told the committee that:

The proposed additional panels are still at the conceptual stage and PFLOTRAN is still in development. It is unknown precisely when PFLOTRAN will be used for any compliance calculations (with or without the 34 MT) for submittal to the EPA because future funding, resources, and priorities will impact the code’s availability. The analysis that is being performed regarding the 34 MT for the NEPA process utilizes the existing performance assessment software (e.g. BRAFLO [sic]) and disposal panels.a

The DOE-EM estimates that the model verification and validation for PFLOTRAN, which will be managed by Sandia and will follow an NQA-1 Quality Assurance program that is approved and audited by the Environmental Protection Agency (EPA), is scheduled to be completed in May 2022. It is not expected that the EPA will perform any additional verification and validation of the code because they have not done so in the past. DOE-EM further stated that: “If PFLOTRAN is to be used in a compliance calculation for the March 2024 recertification, the data cutoff for that recertification would be December 31, 2022 and any inputs to that recertification would need to be completed prior to this date.” aaSee “August 28 Answers to PFLOTRAN Questions,” available by request through the National Academies’ Public Access Records Office at paro@nas.edu.

“It is unclear if this new code base will be relied on for the March 2024 or March 2029 recertification application.

“• As noted earlier, the DSP-TRU waste inventory has caused a renewed look at the potential for criticality, and the simple features, events, and processes (FEP) screening arguments used in the past are now augmented by a full criticality safety assessment, but this work has not yet received regulatory review. The initial criticality safety assessment, which has noted that abatement of criticality concerns may require boron carbide additives or load management, is in the context of the current room/panel design and evaluated for the 10,000-year regulatory compliance period.

“This confluence of events and changes, if approached in the traditional manner, will confound a transparent regulatory and public review of the full dilute and dispose program scope and deny the public and especially the State of New Mexico the opportunity to consider the significance of the dilute and dispose programs in their entirety.”  [Emphasis added.]  https://www.nap.edu/download/25593, pp. 95 – 96.

1. The MoveOn petition to Demand Justice for

Nuclear Frontline Communities in COVID-19 Stimulus is available to your signature at https://sign.moveon.org/p/radiation-relief Please share widely!

for Peace and Disarmament organized by the Women’s International League for Peace and Freedom. https://www.peacewomen.org/node/91898

environmental impact statement about the proposed Savannah River Site Plutonium Bomb Plant has been extended from May 18. For more information, go to https://srswatch.org/