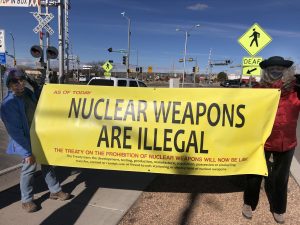 Celebrating the entry into force of the United Nations’ Treaty on the Prohibition of Nuclear Weapons on Friday, January 22nd, the Santa Fe Veterans for Peace invited people to join them in an extended Friday noon vigil. 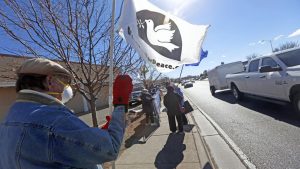 In Santa Fe, at the corner of St. Francis Drive and Cerrillos Road, under a bright winter sun, members of Veterans for Peace held white peace flags that fluttered in the stiff wind, and their light blue, frame-supported banner said, “Nuclear Weapons are Illegal” in black lettering.  Nuclear Watch New Mexico and Concerned Citizens for Nuclear Safety held bright yellow 8-foot banners with the same large black lettering. Across the bottom of all the banners was written, “The Treaty on the Prohibition of Nuclear Weapons Is Now Law.”  Cars at the intersection honked in support of the message that was displayed by about twenty individuals. 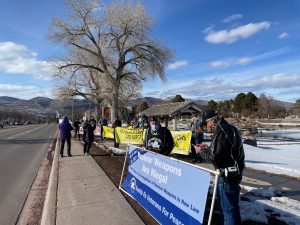 After the hour-long Santa Fe vigil, almost everyone drove to Ashley Pond Park in Los Alamos and stood for a second hour-long vigil on the sidewalks along Trinity Drive.

As the hour came to a close, the group circled around to reflect on the day’s significance.  Mateo Peixinho, of Chimayo, acknowledged that Los Alamos is built on Pueblo de San Ildefonso lands.  He reported that he’d just learned that this day, January 22nd, is the Pueblo’s Feast Day, an auspicious day for the celebration of the Treaty’s entry into force. 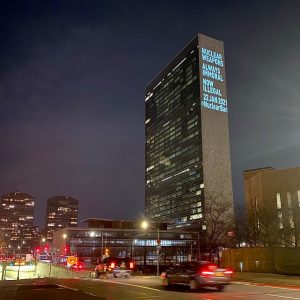 Jay Coghlan, of Nuclear Watch New Mexico, shared words from his inspiring op ed:  “The U.S. was among the last major countries to abolish slavery but did so in the end.  To modify Martin Luther King, Jr.’s famous quote, ‘The arc of the moral universe is long, but it bends towards [the] justice’ of abolishing nuclear weapons.  This ban treaty is the beginning of that end and should be celebrated as such.”  https://nukewatch.org/

Ken Mayers, of Veterans for Peace, added this observation.  “In New York City, activists used high-powered projection lights to illuminate the side of the UN building with a powerful message about nukes for the occasion: ‘Always immoral; Now illegal.’ ’’ 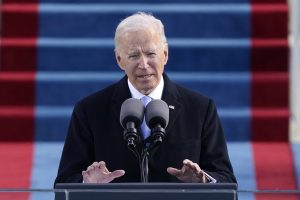 Friday, January 22nd was intense, offering a local perspective and a chance to appear in person, at the end of a remarkable January week.  Monday was filled with the sights and sounds of commemorative programs honoring Dr. Martin Luther King, Jr. On Tuesday, at the reflecting pool in Washington, D.C., President-elect Joe Biden presided over a prayer vigil for the 400,000 lives lost so far in the pandemic. Wednesday, Inauguration Day, brought the focus to plans for the future and the potential to begin anew across the country.

The local demonstrations in support of the Treaty brought home in an immediate way—with live human beings, 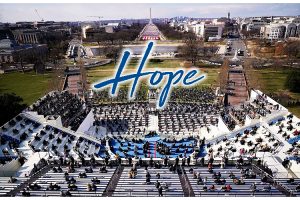 Basia Miller, a CCNS Board member, reflected by saying, “On this sunny day, we joined together also to celebrate the devoted efforts of the thousands of people in the 86 signatory countries and around the world who worked so long to make this United Nations Treaty a reality.”  BASIA’S 1-16-21 MY VIEW

Did You Know about the upcoming public comment opportunity, a CodePink event and interesting articles?