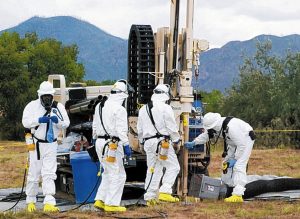 The Department of Energy and Los Alamos National Laboratory (LANL) hosted a public meeting about four major modifications to the New Mexico Environment Department hazardous waste permit that would delay comprehensive cleanup of the large unlined dumps carved into the volcanic tuff and decrease protection of the regional drinking water aquifer below the site.  PMR August 30 2017 Public Meeting Slides[1] Please note that the LANL Slide No. 16 does not accurately reflect the two public review and comment processes – this one initiated by DOE/LANL, and the next one, a regulatory process initiated by the New Mexico Environment Department.  Public comments about both are needed.  Activists argue that this permit process must be stopped because the Environment Department has not developed and implemented the required public participation policy as required by the January 2017 resolution agreement between the U.S. Environmental Protection Agency (EPA) and the Environment Department.

The four modifications, which are often called a “Monster Mod,” proposes major and significant changes to the final LANL hazardous waste permit issued by the Environment Department in November 2010.  DOE and LANL filed lawsuits in both state and federal courts to block portions of the permit.  Seven years of negotiations ensued resulting in a complex Settlement Agreement which requires modifying the permit.  CCNS was a party to the litigation, but did not sign the Settlement Agreement.  http://nuclearactive.org/doelanl-host-august-30th-public-meeting-about-less-cleanup-less-groundwater-protection/ 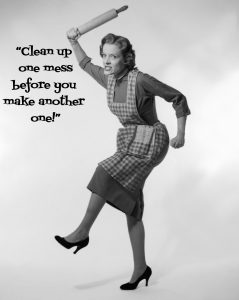 On a similar path, Citizens for Alternatives to Radioactive Dumping (CARD), based in Albuquerque, challenged the hazardous waste permit for a proposed hazardous waste dump east of Roswell, called Triassic Park.  The Environment Department and the Applicant did not translate key documents into Spanish for limited English proficient individuals so they could fully participate in the permit process, among other things.  To correct the discrimination they encountered, CARD filed a Title VI of the Civil Rights Act of 1964 complaint with EPA.  After many years of EPA inaction, CARD joined with similar groups that had filed Title VI complaints, to sue EPA.  In January, EPA and the Environment Department settled the Triassic Park complaint by signing an Informal Resolution Agreement.  The 15-page Agreement requires the Environment Department to develop and implement a public participation policy that includes requires outreach to impacted communities.  http://nuclearactive.org/wp-content/uploads/2017/08/EPA_FINALResolutionLetterandAgreement_TriassicPark_Complainant_011917.pdf

Which brings us back to the LANL Monster Mod.  Three members of the public attended the meeting, clearly demonstrating the lack of outreach to the impacted communities.  Key documents have not been translated for use in Northern New Mexico.

Janet Greenwald, a CARD co-coordinator, attended the meeting and spoke to the lack of compliance with the EPA Informal Resolution Agreement.  She said, “The Environment Department has not informed communities downwind of LANL about the current proposal to modify LANL’s state hazardous waste permit.  This is not right.  The omission violates the intent of the recent Resolution Agreement between the Environment Department and the Environmental Protection Agency in Dallas.  The public process must be stopped until the required community outreach is completed.”