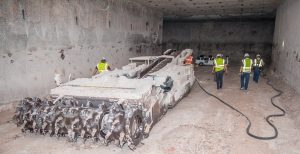 Despite receiving comments from 19 non-governmental and business organizations representing tens of thousands of New Mexicans, the New Mexico Environment Department has permitted the use of the underground disposal Panel 8 at the Waste Isolation Pilot Plant (WIPP) with 16-foot high ceilings.  The Panel 8 ceilings are three feet taller than those in the first seven disposal panels in the underground mine for plutonium-contaminated waste generated from manufacturing nuclear weapons. 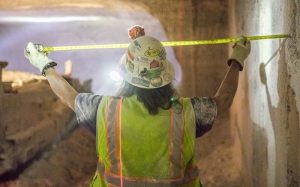 The 19 groups requested that the Environment Department deny the permit modification request or elevate it as a class 3 modification, which would include a public hearing.  WIPP Panel 8 Class 2 PMR Group letter 12-20-21 The Environment Department “determined, based on the public comments received, that ‘significant public concern’ over this [permit modification request] is not supported, which would warrant its elevation to a Class 3.”  https://www.env.nm.gov/hazardous-waste/wipp/ , scroll down to the  February 11, 2022 entry, Response to Comments [AR 220208], p. 5.

It is notable that for the recent renewal of a WIPP groundwater discharge permit, DP-831, the Environment Department found significant public interest when five groups requested a hearing.  https://www.env.nm.gov/public-notices/ , scroll down to Eddy County and Waste Isolation Pilot Plant for Ground Water Discharge Permit (DP-831).

Mining of Panel 8 began in 2013 and was halted in 2014 when an underground fire and radiation release from one or more waste drums shutdown WIPP for nearly three years at a cost of $3 billion dollars. 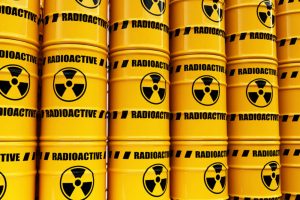 The Permittees, U.S. Department of Energy (DOE) and its contractor, the Nuclear Waste Partnership LLC, claim the higher ceiling is necessary to reduce roof falls that could endanger workers.  Increasing the Panel 8 ceiling height required re-calculation of the limits for emissions of volatile organic compounds (VOC) from the waste drums.  But the Environment Department reports behavior that contradicts that position.

In its response to the public comments, the Environment Department reported that in 2021 the Permittees stated they “had not evaluated the need for VOC calculation changes nor run the model for the VOC calculations with the new room height” and “[o]nce the model was run the Permittees became aware of the need to submit a [request] to update the Permit based on the calculations for Panel 8.”  https://www.env.nm.gov/hazardous-waste/wipp/ , scroll down to the  February 11, 2022 entry, Response to Comments [AR 220208} , p. 9.

Joni Arends, a CCNS co-founder, responded, “How can the Permittees claim in 2021, four years after resumption of mining and increasing the ceiling height by three feet, that they didn’t recognize the need to recalculate the VOC emissions?  The VOC emission limits are what protects workers from the hazards of breathing VOCs.” 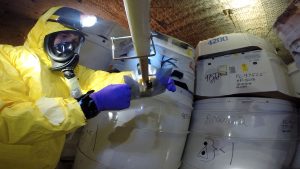 Further, since 2013 the Permittees have been providing the Environment Department with verbal mining progress updates.  https://www.env.nm.gov/hazardous-waste/wipp/ , scroll down to the  February 11, 2022 entry, Response to Comments [AR 220208} , p. 8.

Arends stated, “It is unconscionable that the Environment Department did not require written progress reports.”

These are but two examples of what could have come to light in a public hearing.

For more information:  https://www.env.nm.gov/public-notices/ , scroll down to Los Alamos County, then to the U.S. DOE NNSA-LANL heading and scroll down to Air Quality Bureau, for Public Notice for Air Construction Permit (632MI).  Stay tuned.  Sample public comments you can use will be available soon at CCNS’s website at http://nuclearactive.org/