January 22, 2021 will be a historic day for nuclear weapons.  The United Nations’ Nuclear Weapons Ban Treaty will enter into force, establishing in international law a categorical ban on nuclear weapons 75 years after their development and first use.  https://www.un.org/disarmament/wmd/nuclear/tpnw/ 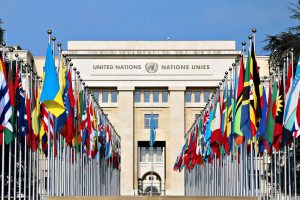 The CCNS Update will focus on the Treaty today and for the next three weeks.  We’ll explore the timeline of the development of the Treaty over the past 75 years and explain how Treaty ratification will advance the movement toward future elimination of nuclear weapons in the United States.  Each week we hope to include some language from the Treaty itself.

We begin by asking, What events needed to occur before the Treaty could enter into force?  To answer this, we use the Oak Ridge Environmental Peace Alliance fact sheet, which says, in part:  The Treaty was approved at the UN in July 2017 by 122 nation states.  According to the 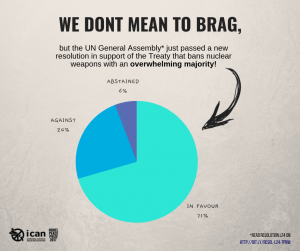 Treaty terms, 50 nation states had to sign and ratify it before it would enter into force.  Entry into force would automatically happen 90 days after the 50th ratification was deposited at the UN.  On October 24th, 2020, Honduras became the 50th nation to deposit its ratification at the UN.  As of November 1, 2020, 84 nation states had signed the Treaty.  https://orepa.org/nuclear-ban-treaty-entry-into-force-resources/

The Nuclear Weapons Ban Treaty, also known as the UN Treaty on the Prohibition of Nuclear Weapons, itself is composed of 20 official Articles covering ten pages.  Today we’ll summarize the six paragraphs of Article 4, entitled, “Towards the total elimination of nuclear weapons.”

Paragraph 1 outlines a procedure for nations that at one time had nuclear weapons.  They “shall cooperate with the competent international authority … for the purpose of verifying the irreversible elimination of its nuclear-weapon programme.”

Paragraph 2 addresses nations that possess nuclear weapons and provides for a plan to be “negotiated with the competent international authority … for approval.”

Paragraph 3 stipulates that after negotiations, a safeguards agreement will be concluded with the International Atomic Energy Agency, to assure that nuclear materials will not be diverted in any way. 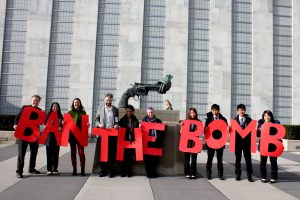 Paragraph 4 asks that each nation that “has any nuclear weapons … shall ensure the prompt removal of such weapons, as soon as possible but not later than a deadline to be determined by the … States Parties.”

We will continue our presentation of the Nuclear Weapons Ban Treaty in the coming weeks.  A copy of the Treaty is available at the International Campaign to Abolish Nuclear Weapons website.  https://www.icanw.org/the_treaty

CCNS will put your donation to work right away as we continue our educational series about the Nuclear Weapons Ban Treaty and organizing local January 22, 2021 entry into force events.

Stay tuned for commemoration events taking place in New Mexico and around the world!  https://orepa.org/nuclear-ban-treaty-entry-into-force-resources/