White House Contemplates Restarting Nuclear Testing to the Detriment of All

In a perverse strategy to bring Russia and China to the table to negotiate a tri-lateral agreement to limit nuclear arsenals, 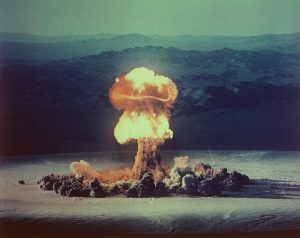 the White House is in on-going internal discussions about restarting nuclear weapons testing.  The last U.S. underground nuclear explosive test was in 1992, at what was then called the Nevada Test Site.  Between 1945 and 1992, radioactive and toxic fallout from its 1,000-plus atmospheric and underground tests fell across New Mexico and across other states.  See “Under the Cloud:  The Decades of Nuclear Testing,” by Richard L. Miller.

In 1996, the U.S. signed the Comprehensive Test Ban Treaty (CTBT), an international agreement to ban all nuclear explosives tests.  It provides for verification and on-site inspections.  But the U.S., along with seven other countries, failed to ratify the Treaty.  http://www.nuclearactive.org/news/031210.html 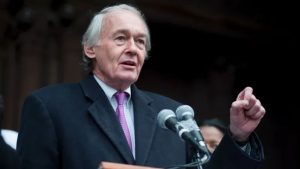 Although the Treaty has not entered into full force and for that reason the verification and inspections provisions are not in effect, only North Korea has tested.

On Saturday, May 23rd, U.S. Senator Edward Markey, of Massachusetts, wrote to the President to “oppose in the strongest possible terms a historically reckless resumption of explosive nuclear weapons testing.”  He urged the President to use “superior alternatives,“ including leading “a diplomatic effort to bring the CTBT into force, [which] would allow for the intrusive, short-notice, and on-site inspections that are the most effective way to enforce compliance.”  Senator Markey is working to introduce legislation to prohibit new nuclear testing and to bring the Treaty into force.  https://www.markey.senate.gov/news/press-releases/senator-markey-demands-trump-administration-abandon-reckless-restart-of-us-nuclear-weapons-testing

A discussion to restart nuclear weapons testing inevitably triggers those who have been harmed from cumulative overexposure to radioactive and toxic fallout.  They are called Downwinders, and there are thousands of New Mexicans who were exposed to the first nuclear weapons test on July 16, 1945, at the Trinity Site and to fallout from the Nevada Test Site.

In 1990, Congress created the Radiation Exposure Compensation Act (RECA), a program to provide compensation to some of Downwinders 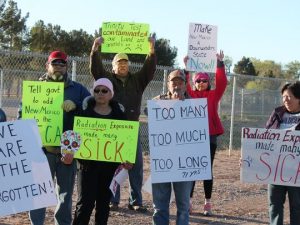 in other states, but not the New Mexico Downwinders.  LCN May 28, 2020 PLEASE REFERENCE PAGE 6 FOR “COVID-19 STRIKES NM ON THE 75TH ANNIVERSARY OF THE MANHATTAN PROJECT,” SUBMITTED BY BERNICE J. GUTIERREZ AND PAUL LOPEZ PINO.

Tina Cordova, a co-founder of the Tularosa Basin Downwinders Consortium, which has been working for 15 years to include the New Mexico Downwinders in RECA, said, “It’s been 75 years since the people of New Mexico were enlisted into the service of their country as participants in the first nuclear test anyplace in the world.  The U.S. government has never recognized this or taken care of the devastating health consequences that developed as a result.  Why would we ever think that testing today would yield a different result from the government?  Who would want the testing to take place near where they live and raise their families?  This just can’t happen again.”  https://www.trinitydownwinders.com/

For more information, check out Retake Our Democracy’s recent * important * Zoominar “NM State Budget Crisis, a Moral Crossroads,” with advocates from Voices for Children and Rep. Javier Martinez, Chair of the House Tax & Revenue Committee.  The best quote from the Zoominar:  “We don’t have a budget problem, we have a revenue problem.”   https://retakeourdemocracy.org/the-nm-state-budget-crisis-an-opportunity-to-diversify-our-budget-or-shred-our-education-health-social-service-systems/