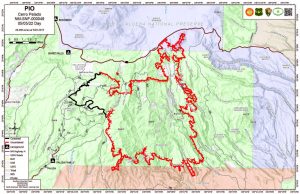 As of Wednesday evening, May 4th, the Cerro Pelado wildland fire was about five miles from the “back gate” of Los Alamos National Laboratory (LANL).  With expected southwesterly winds across the fire to continue the rest of the week and into the weekend, public concerns about wildland fire prevention and protection are running high.  LANL’s back gate is located at the intersection of State Roads 4 and 501, near the Ponderosa Group Campground. 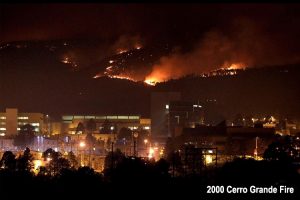 CCNS is particularly focused on the Cerro Pelado fire and its proximity to LANL.  While the 1996 Dome wildland fire came very close to the laboratory, in 2000 the Cerro Grande fire burned over 7,000 acres across the LANL firing sites, and came close to the Plutonium Facility and the Area G radioactive dump.  http://www.nuclearactive.org/docs/CerroGrandeindex.html  In 2011, Las Conchas fire burned about 47,000 acres across the Pajarito Plateau on the first day, a rate of about an acre per second.  In the end, only one acre burned on LANL.  These fires were devastating in themselves and they opened new pathways for LANL’s radioactive and hazardous pollutants to migrate from the burned areas towards and into the Rio Grande.  https://nmpoliticalreport.com/2017/05/17/the-heart-of-darkness-a-walk-through-the-scorched-landscapes-where-our-forest-used-to-be-and-a-glimpse-of-our-future-fires-en/ 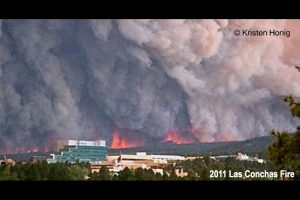 The independent Inspector General found that the LANL contractor responsible for preparing two plans, the 2014 Forest Plan and the 2016 Five-Year Wildland Fire Plan, had failed to fully implement the activities designed to reduce wildland fire impacts.  It also found that there was a lack of federal oversight and formality in meeting the plans’ goals.  DOE and LANL stated to the Inspector General that follow-up to the two plans would be done.  But a search for the follow-up documents was unsuccessful, so it is difficult to determine if the follow-up plans were properly implemented. 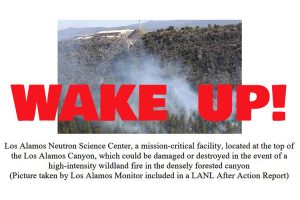 Currently the incident commanders and foresters are reporting that the Cerro Pelado fire is low-intensity and burning like a prescribed burn across the Las Conchas fire burn scars.  https://inciweb.nwcg.gov/incident/article/8075/68450/  But given the history of wildland fires on the Pajarito Plateau, anything could happen.

Joni Arends, of CCNS, said, “Our hearts are with those impacted by the 20 wildfires burning in New Mexico. During the Dome fire, forester Bill Armstrong called the crown fire ‘a wakeup call that nobody woke up to.’”  The DOE Inspector General’s report, the lack of follow-up to the two plans, and the Cerro Pelado fire are yet more wake-up calls.

The New Mexico Department of Homeland Security and Emergency Management (DHSEM) in coordination with multiple state agencies have established a Joint Information Task Force (JIC).  DHSEM has launched an updated wildfire page on the DHSEM webpage.  https://www.nmdhsem.org/2022-wildfires/ and https://losalamosreporter.com/2022/05/05/joint-information-task-force-established-to-provide-public-with-consolidated-fire-information/

DHSEM says it is the most reputable, up-to-date site for anything related to the wildfires.  The department encourages everyone to go to use this site as their primary and most accurate wildfire source of information. 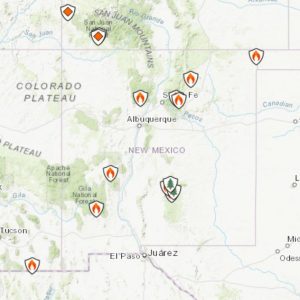 The department has also launched an official DHSEM Facebook page, where the latest wildfire information along with other DHSEM initiatives will be posted.  https://www.facebook.com/NewMexicoDHSEM

To receive alerts about Cerro Pelado fire activity, sign up for CodeRED.  https://www.sandovalcountynm.gov/codered/

Additional information can be accessed on https://inciweb.nwcg.gov/