The Department of Energy (DOE) wants to expand WIPP beyond the limits set in federal law, state agreements, the WIPP Permit, and DOE’s decades-old social contract with New Mexicans. But instead of presenting their entire plan to the public for review, DOE is trying to have different parts of the plan approved piecemeal, to avoid the required public process to examine the entire plan, and before the public and state officials decide if DOE’s expansion plan is even needed.

The latest “piece” is the current permit modification to add a new, fifth shaft to the WIPP underground. This permit modification is scheduled for public hearing, starting on May 17th. DOE claims the New Shaft and accompanying corridors (drifts) are needed for ventilation during current operations, but in fact, they are part of the build-out that will later include waste panels and waste rooms that would more than double the size of the underground disposal area. 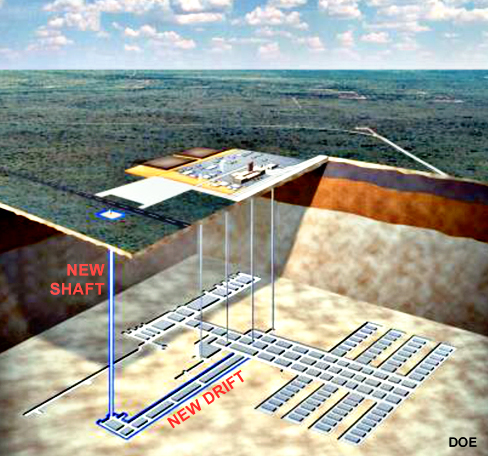 What is the Real Purpose of the New Shaft?

It is true that the drum explosion and radioactive release from WIPP in 2014 contaminated much of the underground and the exhaust shaft so that underground workers have been working with less than half of the air flow they had before the accident. However, the claim that the New Shaft is needed for ventilation of the existing underground space is bogus.

The existing four shafts provided all needed air for the first 15 years of operations. It is only because of the contamination that all air exiting the underground through the exhaust shaft must now be filtered. 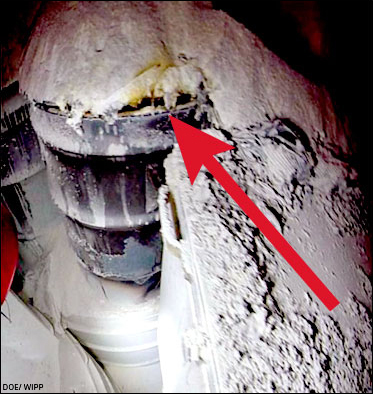 In 2018 DOE began construction on a New Filter Building (NFB), which was expected to be completed in 2020 and would have provided all necessary air for the existing underground areas. But the NFB construction has been botched and is many months behind schedule and tens of millions of dollars over budget. Though the NFB can provide the needed air without the New Shaft, the New Shaft can’t improve airflow without venting contaminated air unless the New Filter Building is in place.

Though DOE claims the New Shaft is needed for current operations, not future expansion, DOE expects to complete the New Shaft and drifts in 2023, less than a year before WIPP is supposed to cease waste emplacement operations in 2024 under the current permit. Do they really think we can believe they are spending almost $200 million on a shaft that is to be used for just a few months?

Finally, though DOE claims this is only a ventilation shaft, they, and others often refer to it as a “utility shaft” which is a better descriptive name since in the future, the shaft would include a waste hoist for operations in the new waste panels and waste rooms that will make up the rest of an expanded WIPP.

The National Academies of Sciences (NAS) examined DOE’s plans to bring more waste and new waste (like highly concentrated “surplus” plutonium) to an expanded WIPP. Their April 2020 report said that the legal capacity limit at WIPP “…is likely to be exceeded…” by DOE’s expansion plans. The NAS report further determined:

FINDING 5-4: By virtually any measure, the proposal to dilute 48.2 Metric Tons of surplus plutonium and dispose at the Waste Isolation Pilot Plant (WIPP) represents a substantial technical and “social contract” change for WIPP and the State of New Mexico.

FINDING 5-7: A segmented and incremental approach to revealing the full inventory under consideration for disposal … in WIPP … obfuscates the total anticipated inventory expected for WIPP and its consequences. An incremental approach inhibits a comprehensive review by regulators and public of the full impact of the proposed … program on a future WIPP.

DOE does not have sufficient space at WIPP to dispose of all defense TRU waste.

In 2020, it was the GAO – not DOE – that provided the public with the design of DOE’s plan to more than double the amount of disposal panels at WIPP. 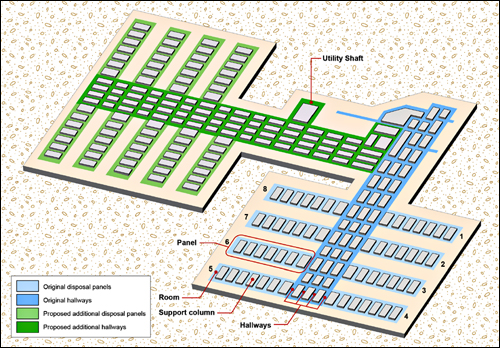 People Have Not Been Fooled

DOE has not presented its expansion plan to New Mexicans. But People have not been fooled. Since at least 2005 the public has been concerned about DOE’s plans to expand WIPP. That concern has continued to grow.

In 2019, 97 percent of the 295 organizations and individuals commenting on the New Shaft permit modification request, opposed that request and also objected to the proposed WIPP expansion.

In 2020, 97 percent of the 360 organizations and individuals that commented, again opposed the New Shaft draft permit, including objecting to the proposed WIPP expansion.