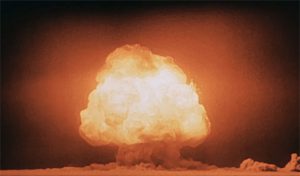 The Tularosa Basin Downwinders Consortium will commemorate those who have lost their lives due to overexposure to high levels of ionizing radiation from the first atomic bomb test in south central New Mexico.

The U.S. Government exploded the Trinity plutonium bomb on the morning of Monday, July 16th, 1945, at 5:29 am, at what is now known as the White Sands Missile Range.  The damage done has yet to be recognized by the U.S. Government.

The Tularosa Basin Downwinders Consortium, also known as the Trinity Downwinders, are hosting the memorial event on Thursday, July 16th, beginning at 5:20 am to commemorate those who have lost their lives.  It will take place outside at Civic Plaza in downtown Albuquerque.  The event will be live streamed.  For more information, please visit https://www.trinitydownwinders.com/ . 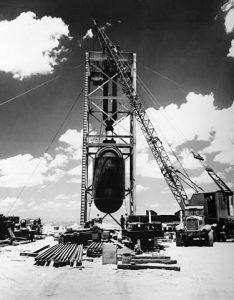 At 5:29 am, they will acknowledge the dropping of the bomb 75 years ago.  After introductory remarks, the names of those who have lost their lives will be read with musical interludes.

At 9 am, Lieutenant Governor Howie Morales and other dignitaries will join and provide comments.

If you would like to add the name of family members or friends who have lost their lives as a result of overexposure to the Trinity test, please email the Trinity Downwinders at info@trinitydownwinders.com before Monday, July 13th.

The Trinity bomb was the first bomb of its kind.  It was over packed with 13 pounds of weapons grade plutonium.  When it was exploded, only three pounds fissioned and the other 10 pounds were distributed into the environment and into the bodies of people and animals.  Because the test took place on a 100-foot tall tower, the force of the blast enveloped the vegetation, sand, and dirt, and took it up into the fireball that rose over seven miles into the stratosphere.  The plume stratified, dividing into layers and moving at different heights and in different directions over the desert of New Mexico, dropping radioactive fallout as it moved.  One can picture the stratifications if you recall how the hot air balloons move through the “box” during the Albuquerque Balloon Fiesta. 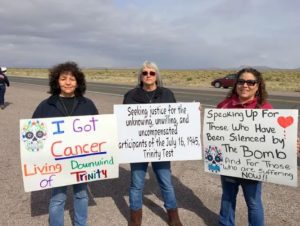 As a result of the damage that was done, the U.S. Government began creating its false narrative about the test.  Scientists and officials at Project Y, the name of Los Alamos National Laboratory during the Manhattan Project where the bomb was fabricated, said the impacted area was “remote and uninhabited.”  Nevertheless, U.S. Census data from 1940 indicate that tens of thousands of people lived, farmed, hunted, and raised families within a 50-mile radius of the test.

1.  Monday, July 13th at 6 pm – Joni Arends, of CCNS, will be speaking with the Women’s International League for Peace and Freedom

2. Monday, July 20th – Comments due to NRC about their proposal to allow for disposal of radioactive waste in municipal landfills.

The latest proposal is called “Very Low-Level Radioactive” (VLLR) Waste.  In the mid-1990s it was called “Below Regulatory Concern,” or BRC.  A sample public comment you can use is here. VLLW Comments due 7-20-20 Please submit to:  VLLWTransferComments.Resource@nrc.gov 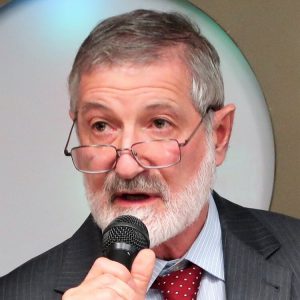 hosted by the New Mexico 75th Commemoration of Hiroshima/Nagasaki Committee and Pace e Bene. CCNS is an organizer and co-sponsor of the event. The webinar is free.  Please register or check the website closer to the event date for more information. https://paceebene.org/hiroshimaday2020