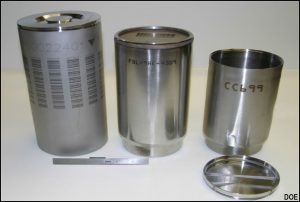 DOE is breaking the promises it made to New Mexico in exchange for the state’s agreement to allow permanent disposal of some of the nation’s nuclear weapons’ waste con-taminated with plutonium or other transuranics.

Transuranic radioactive waste is produced during nuclear weapons research and production and includes the equipment used during the process.

The Waste Isolation Pilot Plant (WIPP), where this waste is being buried, is limited to accepting only 6.2 million cubic feet of waste and only waste contaminated with transuranic waste, not pure plutonium itself (surplus plutonium – surplus plutonium containers are shown above). DOE promised to build other repositories for the waste and the state permit provides that waste disposal must end in 2024.

Since WIPP began, everyone knew that its capacity was too small for all of the transuranic-contaminated waste existing even at that time. That’s one reason DOE pledged to create additional repositories. 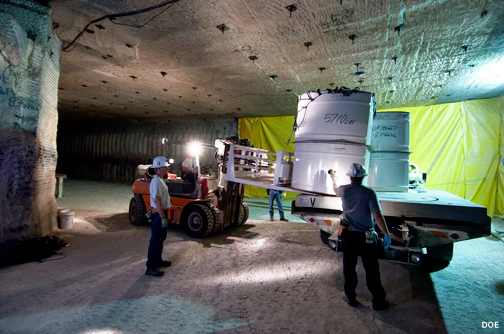 It was DOE’s responsibility to identify sites in other states, and construct additional repositories – a responsibility that DOE failed to meet, as these sites were never sought and never built. New Mexico has been left as the only repository, an option the State clearly rejected in the 1980s. DOE has no plans for any other repositories and now wants to bring additional surplus plutonium to WIPP in amounts that would require WIPP to expand and operate, essentially, forever.

Increasing the kinds of waste and the volume of waste disposed in WIPP as DOE’s surplus plutonium plans would do, will also increase the risk from the project both in the area around WIPP and to people on the transportation routes. WIPP has failed before when it released radioactive contamination in 2014. How would another release from the site or along the routes affect our traditional ranching, dairy, recreational, oil & gas, and other economies?

We were promised that the risk to our state would be limited by limiting the volume of waste, the types of waste and the time that WIPP would operate. Why should DOE be allowed to break that promise now? 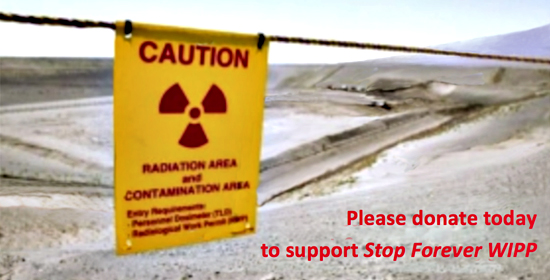