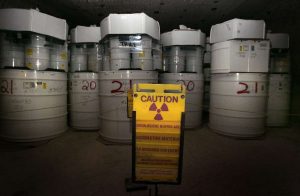 On Tuesday, October 23rd and for additional days, there will be technical testimony and cross-examination of witnesses on the proposal to expand by about 30 percent the amount of radioactive and hazardous waste allowed at the Waste Isolation Pilot Plant (WIPP).  The hearing is being rushed.  Over objections of many groups to the schedule and to the limitation of oral public comment to one location, it appears the New Mexico Environment Department wants to approve the change before the current Secretary leaves office on December 31, 2018.  The only location for testimony and public comment is in Carlsbad.  https://www.env.nm.gov/wp-content/uploads/2016/05/FINAL-WIPP-Hearing-Notice-VOR-English.pdf and https://www.env.nm.gov/wp-content/uploads/2016/05/FINAL-Hearing-Notice-VOR-Spanish.pdf

The request by the Department of Energy (DOE) and its contractor, Nuclear Waste Partnership, would change the way the amount of waste has been measured for more than two decades. But DOE has not explained where the additional waste would be disposed since there is not space in the existing underground rooms, nor why the change is needed when WIPP is less than 55 percent filled.

Because the federal WIPP Land Withdrawal Act limits the amount of waste to 6.2 million cubic feet, how the waste is measured is important.  Waste emplaced at WIPP has always been measured based on the volume of the outer container.  That’s the way DOE has always reported to Congress how much waste is at WIPP, how DOE contractors have been paid and received performance bonuses, and the way that the WIPP Permit calculates the amount of waste.

An unstated reason for the proposed measurement is that space for more than 1,000,000 cubic feet of waste has been forfeited or lost because of bad DOE management, poor contractor performance, and inefficiencies during the past 19 years of WIPP’s operations.  DOE has shipped and disposed of thousands of empty, or dunnage, containers and has intentionally not filled containers to capacity.

Technical witnesses at the hearing will be Ricardo Maestas for the Environment Department; Don Hancock and George Anastas for Southwest Research and Information Center, http://www.sric.org/;  Steve Zappe, who was the WIPP permit writer for more than 15 years, as an individual; and DOE contractors, Bob Kehrman and Mike Walentine, http://nwp-wipp.com/.  Those organizations and individual, Concerned Citizens for Nuclear Safety, http://nuclearactive.org/, and Nuclear Watch New Mexico, https://nukewatch.org/, can cross-examine witnesses.

Public comment will be held at 5 pm each day. The hearing begins at 9 am on Tuesday, October 23rd in Room 153 of the New Mexico State University Carlsbad Branch, 1500 University Drive, in Carlsbad.